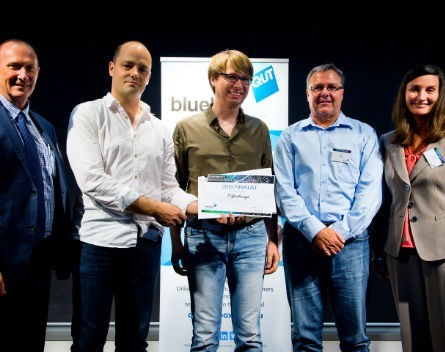 Brisbane-based startup Clipchamp is tackling the same problem as a big venture capital-backed American startup that thankfully is a fictional one.

On HBO’s comedy Silicon Valley, a team of misfit developers accidentally stumble on a magic algorithm for video compression that makes their startup Pied Piper the next hot thing in the tech world.

Clipchamp is following in the footsteps of the trouble-prone Silicon Valley team in creating a video compression startup, but co-founder Alex Dreiling says that’s where the comparisons end.

While the Pied Piper team accidentally formulated a middle-out lossless compression algorithm, Clipchamp offers a way to convert, compress and record videos from within a web browser.

“On the show they created their own compression algorithm – we don’t do that,” Dreiling says.

“We came up with an innovative way of compressing and converting.”

Creating by Dreiling, a fellow QUT staff member and some friends, the Clipchamp site allows users to compress high-quality, large video files at a high speed without losing quality, and then share them via Youtube, email or social media.

“Humanity is now uploading more than 4 billion videos a day, and waiting 2 billion hours to do so,” Dreiling says.

“We built a service that can save users more than a billion hours of waiting each year while at the same time creating more than $1 billion in value for video-hosting platforms like YouTube and Vimeo.”

It all runs in the browsers, but the videos are processed locally on the computer, meaning no outside software is needed, and according to Dreiling this is what sets Clipchamp apart from its real competitors, as well as its fictional one.

“We’re different from the rest of the market,” he says.

“Our software does video conversion and compression right in the browser with nothing else than the native capabilities of the browser, and we’re unique in that regard.

“There are video compression and conversion tools, but most of them are native in the operating system, meaning you have to download, maintain and learn about them.

“Cloud tools are fantastic but you have to get the uncompressed video to them, and that takes ages.”

Dreiling says his platform can drastically reduce the time it takes to compress or convert a video, pointing to a top 100 YouTube publisher who dubbed the site “life-changing”.

“It has cut down his upload time from five or six hours to 14 minutes,” he says.

For uncompressed GoPro footage at a maximum resolution, he says Clipchamp can get that down to 10% of the original size, while speeding up the process by anywhere up to 20 times depending on the input video.

A means to monetisation

After rolling out in August last year over half a million users have utilised the Clipchamp platform, with the startup now boasting 100,000 monthly users.

It’s found some interesting target audiences, with it becoming commonly used in education, with teachers asking students to use it in upload assignment videos, and in video recruiting.

Clipchamp was recently crowned winners at the qutbluebox Innovation Challenge, receiving a $50,000 prize that will be used to roll out a new feature: a plugin for websites called the Clipchamp button.

“Any website out there can take all of what Clipchamp does straight to their own site with just a line of code,” Dreiling says.

This button will be the startup’s first move to monetise the software, with it being on offer in the next couple of weeks for a monthly subscription fee.

While the site now has a lot of visitors who stick around for a long time, Dreiling says incorporating advertising isn’t an option.

“We haven’t done that yet because we believe it destroys the product,” he says.

They’ll also be introducing a premium option for different users from next year after they hit one million monthly users.

While videos are becoming the primary driver of the likes of Facebook, Dreiling says few other startups are focusing on the uploading part of the process.

“The majority of the market is focusing on downloading, and we’re one of the only ones focusing on uploading,” he says.

“We are really only focused on how to get videos to these sites faster and easier. We want to get users into a position so people can engage with these videos quicker.”