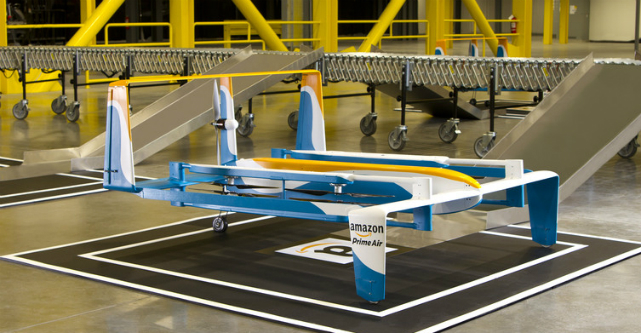 Amazon recently announced plans to test a drone delivery system in parts of the UK that are hard to access with conventional delivery methods.

While much attention has focused on the service it would provide to Amazon customers, the really interesting story is what this agreement with the British government tries to achieve on a much broader level.

If successful, it will essentially create a high-altitude floating highway between 200 and 400 feet above the ground, within which a whole range of activities could be performed. As a result, everything from drone ambulances to drone police surveillance are on the cards for our future. So how ready are we for this transformation of air space?

Amazon’s announcement reveals the plan focuses on three key aspects of drone technology that the UK’s Civil Aviation Authority has said it wants to see innovation in.

The first of these is collision avoidance technology, the kind you already find in cars, where sensors detect how close the car is to another object or vehicle and prevents it from crashing.

This is important because present rules ban users from flying their drones outside of their line of sight, so they can always take control if there’s a problem. Collision avoidance does away with that need because the drone would be able to stop itself from causing accidents.

The second technology is fully autonomous systems, essentially intelligent flying machines that would require very little – if any – human control. Such devices could be capable of deciding where and when they fly, and could be mixed use systems. The same drones could conceivably be used to provide emergency support to patients in need of blood quickly, or for delivering a stove to campers who forgot to pack everything.

The third objective is to test out a system that would enable a single operator to fly multiple drones at the same time. This points to the possibility of fleets of flying objects that could undertake any number of operations, from police surveillance and crowd management, to disaster monitoring and rescue operations.

For example, if a mountaineer is lost in the hills, a single operator could manage a number of drones to fly across a region and identify the site where the person is located. Together, the drones will share information to speed up the process and ensure support is provided as quickly as possible.

Cracking these technological challenges is a core priority for drone regulators, not least because it will open up drones for use in all kinds of other capacities. For instance, in the last two years, researchers have been developing a drone ambulance.

This is essentially a flying defibrillator that could be sent out to someone having a medical emergency and used by a bystander to provide essential care when no other alternative is available. We can expect to eventually see drones flying urgent medical products around the UK, helping to save lives and beat the current limitations of ground deliveries.

Amazon already has a remarkable delivery network and moving into drones at this early stage will ensure it dominates future airborne delivery systems, as well as adding to its brand image of being a technology innovator.

So, it’s reasonable to assume that the British government is working with Amazon to enhance its capacity to pursue a range of other drone applications, from connecting drones to smart city technology to enabling all kinds of surveillance.

After that, a wide variety of commercial interests will follow with any number of claims being made to occupy our low-level air space.

These prospects won’t sit well with everyone and there are already indications of how the public will resist such trends. In the US, for example, a project called “No Fly Zone” allows people to register the air space around their homes as private and is calling on drone manufacturers to pre-program their machines to avoid it.

The proliferation of drones around us in the world also raises the questions of how they will all be organised. Will drones be flying around randomly, avoiding each other with their collision avoidance technology? There is a good chance that a drone highway will actually mirror our present-day road network.

The advantage of this would be that drones could count on an established configuration of routes that are mapped out around the world.

This may not be the most direct flight path but it takes into account that drone highways, like our present road network, will become quickly congested. This kind of issue shows why we need some sensible rules to avoid catastrophic failure.

Andy Miah is the chair in science communication and future media at the University of Salford.