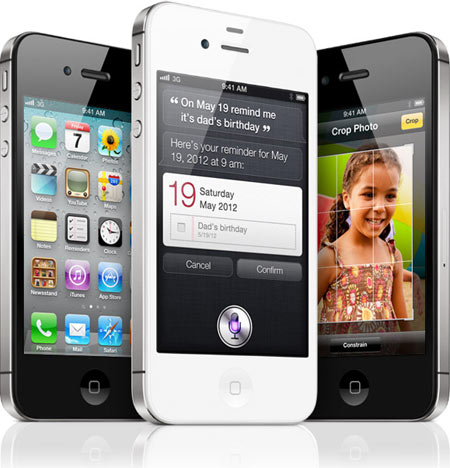 Apple launched its new iPhone 4S at its press event in San Francisco this morning, and introduced a new, powerful voice recognition technology, but stopped short of releasing an improved iPhone 5 with an all-new design.

Apple also confirmed the new iOS 5 software will be available from October 13 in Australia, but also revealed one disappointment – local users will miss out on the cloud-based iTunes Match service for now.

Instead of a totally new gadget, Apple chief executive Tim Cook took to the stage in his first keynote to debut the iPhone 4S, along with a small mix-up to its iPod line.

But perhaps the biggest announcement of the day was the debut of Siri – a new voice-powered personal assistant built into the iPhone 4S that will allow users to make calendar appointments, calls, reminders, text messages and calls using their voice.

While Cook welcomed analysts, press and developers to the event, It was senior vice president of marketing Phil Schiller who took to the stage to announce the 4S after recapping iOS 5 and iCloud, telling attendees that while the device looks similar to the current iPhone 4, “inside it’s totally different”.

The gadget is powered by the new A5 chip, the same in the iPad 2, which allows the iPhone to run twice as fast and process graphics seven times faster than the iPhone 4.

It has an eight-megapixel camera, longer battery life and a new antenna that automatically changes between transmit and receive to maintain a consistent signal.

The device also has both CDMA and GSM, which will allow users to roam on overseas networks using the same phone. Apple calls it a “world phone”.

The camera has been given a significant upgrade, with better white balance, the ability to record video at 1080p HD, and new face-recognition technology. Colour sensors have also been given an upgrade, with sharpness up by 30%, while double-tapping the home button now opens the camera – Apple brags it only takes 1.1 seconds to get your first picture.

AirPlay Mirroring has also been introduced, which will allow users to play games on their iPhone while streaming through an Apple TV to a television set. Some other tablets, including the BlackBerry Playbook, have had this feature for a while.

The 4S will debut on October 14. Australia has been bumped up to a release-day country, meaning users will get their hands on the device as early as next week, along with customers in the United States, Canada, Britain, France, Germany and Japan.

There’s been no word on pricing yet, although the device is expected to cost upwards of $US799 in Australia. Carriers will surely be offering the device through caps as they have done with previous iPhone models.

But the biggest announcement of the day was the debut of Siri, a new voice technology that will act as a type of personal assistant for users, allowing them to make appointments, reminders and search the internet with their voice.

In an impressive display of technology, Schiller showed off some of the requests Siri can answer, such as, “what’s the weather like today?” or “how is the NASDAQ performing?”

Siri is being marketed as a “humble personal assistant”, with Schiller using a fairly long demonstration to highlight all the different features. Some were simple, such as “give me directions” to a particular place, while others were a bit more complicated.

Schiller used the phrase “wake me up tomorrow at 6am” to automatically set an alarm, and said “find me Greek restaurants in Palo Alto” to bring up a range of different restaurants to try out.

Asking “Do I have any meetings Friday at noon?” allows Siri to check the calendar and respond with a positive or negative, while Schiller then showed off that you can respond to text messages using your voice to set up meetings.

The new reminders feature profiled in iOS 5 earlier this year was also integrated. Schiller said “remind me to call my wife when I leave work”, which caused Siri to form a geofence around the Apple campus, which will trigger the reminder whenever he leaves.

Creating notes, looking for addresses, setting alarms, browsing the web and emails are just some of the features available through Siri. However, this feature is only available on the iPhone 4S – most likely due to the extra processing power required.

Contrary to earlier reports, Apple did not kill the iPod line-up, but did give the iPod Touch and iPod Nano ranges a tune-up.

The iPod Touch will receive the iOS 5 update, which will allow users to message back and forth over W-Fi, while the device has also been given a white version. Prices have dropped to $US199 for 8GB, $US299 for 32GB and $US399 for 64GB, although these will most certainly be higher in Australia.

The iPod Nano has been given some new features, including some upgrades to its fitness Nike+ software, and a few more watch faces for users who like to wear the gadget that way. The Nano is now priced at $US129 for 8GB, and $US149 for 16GB.

Some other new features…

While some users have dubbed Apple’s announcement as a disappointment with no iPhone 5 on the horizon, there were definitely some new, fascinating features. The first is a new addition to the Find My iPhone service called Find My Friends.

Senior vice president of iOS software Scott Forstall showed off the new feature that will allow you to find friends and family members as long as they have agreed to share their contact information with you.

Similar to Google’s Latitude service, the Find My Friends feature will be able to be set for specific hours during the day. Apple will most certainly be advertising this service to parents, prompting more iPhone sales for younger kids.

And in a dig at greeting card companies, Apple has debuted its own card service. With a new application, users will be able to pick out a card, design it, and then post it to anyone either in the United States or in any other country.

Forstall also showed off some impressive statistics, including that over $US3 billion has been paid out to iOS developers, with more than one billion apps being downloaded every month. There are now 140,000 iPad apps available, with over 500,000 for iOS devices.