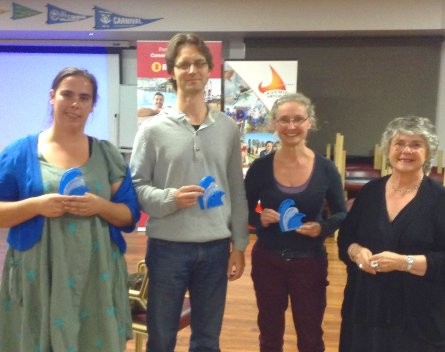 A smartphone app offering audio tours for sightseers has been crowned the winner of this year’s SeaChange StartUp Camp in Merimbula, while one of the runners-up formed their idea on the Entrepreneurs SeaChange Bus.

The second annual SeaChange StartUp Camp Merimbula, organised by non-profit group IntoIT, was held on the weekend at the Pambula Surf Lifesaving Club.

Participants had the option of travelling to Merimbula on Australia’s first-ever StartUp Bus, which has been renamed the Entrepreneurs SeaChange Bus.

Sydney-based entrepreneur Marc Englaro, who heads up InsightfulCRM, was the master of ceremonies on the bus. According to him, the bus was a great success.

The event itself had 17 registered participants, says Englaro, and seven of those travelled on the bus.

“The benefit of being on the bus is you’re already in tight confines with a bunch of other like-minded, entrepreneurial-spirited people,” Englaro told StartupSmart.

“You have little to do other than talk about start-up ideas and things that interest you… We had about eight or 10 ideas develop on the bus and presented to the room when we got to Merimbula.

“One of the ideas [developed on the bus] sort of merged with another idea developed by a local in Merimbula. They merged into a project that got named Little Look, which was one of the runners up in the presentations.”

Little Look is a location-based mobile application delivering content that is “relevant to here and now”.

Users can access photos and reports on the conditions of their local beach, or other location, based on crowdsourced updates from other users recently in the area.

While Little Look was named one of two runners-up for the event, Phonic Path was named the winner.

Phonic Path – which consists of Sarah James, Carston Eckelmann and Jackie Stallard – aims to create a smartphone app that provides tourists with audio tours of the area they are visiting.

The business was inspired by Stallard’s experience living in Birdsville, a small outback town in Queensland, and hearing tourists describe the Birdsville Track as boring, having failed to fully experience the area.

The Phonic Path team believes lots of valuable content already exists, but is held by tourism groups, government agencies and other organisations.

Phonic Path aims to bring all this content together in an easy to access, app-style environment for tourists.

It was judged by the evaluation panel to be the team with the best business idea and plan, and likely to receive strong support from local tourism and regional development agencies.

The other runner-up was Pass-A-Buck, a web and mobile app that notifies the user’s phone or email contacts about tasks they need done.

If someone helps them out, the app organises a gratitude payment, thus taking out the “squirm factor” of money coming between friends.