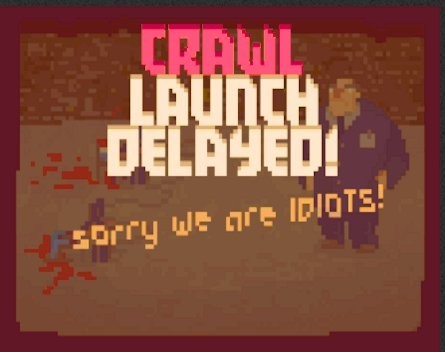 Independent Melbourne-based game developer Powerhoof has taken a unique approach in announcing a delay to a forthcoming game, using an animated gif to make the break the news.

Their entertaining approach caught the attention of international tech site Re/code, which asked: “Why aren’t product delays always this fun?”

The two-man design studio was set to release a playable demo of its first game, a competitive multiplayer dungeon game called Crawl, on July 17. Unfortunately, as launch day approached, the duo was hit with an unexpected tax-related delay.

“We thought we had all the forms filled out, but there’s a database in the US that needs to be updated. And it turns out it can take up to 30 days to update.”

“Everything was on track until pretty much the last step, where we got hit with an unexpected bit of red tape that we were told ‘may take up to 30 days’ to resolve. We tried to find a way around it, but there’s nothing we can do.”

With their hands tied, they took a creative approach and announced the delay with an animated gif depicting their battle with the taxman:

As for the game itself, its design is based on the 8-bit classic computer game Gauntlet.

“Who knows – depending on how long the delay is, we could even make IRS Man a villain in the game!”