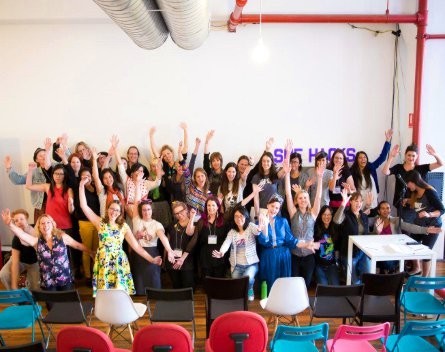 Hackathons are held just about every weekend somewhere in Australia, but one held this last weekend had a pretty significant point of difference.

She Hacks was the first female hackathon held in Australia with the event running simultaneously across Sydney and Melbourne. The sold-out events were hosted by Girl Geek Dinner Sydney and Girl Geek Melbourne respectively.

With lack of female diversity in startups an ongoing issue, it’s hoped the event will foster stronger interest in women getting involved in the industry.

Before the event Melbourne coordinator Tammy Butow told StartupSmart she was looking forward to seeing the impact of more tech-savvy women.

“The internet we know now was primarily built by men, so we wonder about what it will look like if there were more women involved in it,” she said.

Eleven teams were created in each city consisting of hipsters, hackers and hustlers (that’s designers, programmers and non-technical businessfolk).

The event proved a hit among the community with many singing its praises on social media.

Melbourne event attendee Lisy Kane says the 24 hours of creative and technical mayhem was a great insight into the raw talent local women have to offer.

“I was amazed at the variety, innovation and team work each of the presentations showcased,” Kane says.

Teams were created on the first night and worked on their ideas until midnight on Friday. They were back early for day two, having to deliver their pitches by 4pm. Amongst the push to deliver a minimum viable product (MVP) by deadline, the Melbourne event put aside some time for yoga.

The team winners in Melbourne were:

Grand Prize Winner: Garage Sale Map which let’s people see what garage sales happening near them on a map on their phone.

Runner-up Winner: Wake Up Dress Up, which is an app that fuses morning weather updates with suggestions of possible clothing outfits.

Social Good Prize Winner: OneStopeRecycle, an app to assist with the confusion of how to dispose of specific items.

The team winners in Sydney were:

First Prize Winner: Mission Possible, which is designed to connect volunteers with coordinators to assist with disaster relief.

Second Prize Winner: My Coffee Run, a coffee ordering app that allows you to take orders from friends and keep tabs on what they owe you.

Third Prize Winner: Bookloverz, a social media app for sharing what you are currently reading with others nearby.

Both competitions had prizes donated by sponsors. The winning Melbourne team won $2,500 in cash and access to a number of Melbourne mentors. The winning Sydney team received a Nexus 7 and a She Hacks trophy from Google.

Money made through tickets at the Melbourne event was donated to One Girl, a Melbourne-based charity that seeks to fund girls to go to school in Sierre Leone.

Organisers plan to hold the event again next year.

Here are some tweets from the event:

My first hackathon… I’m in a very talented team… and we’re building something really fantastic that I would actually use! #shehacks

What an exciting vibe last night as I did my mentoring rounds at #shehacks. Cannot wait for pitches at 4pm! #gogirls pic.twitter.com/nuNQCdYdUm

So many ideas! So little time! #SheHacks