Bloom Impact Investing and Brighte are among the companies featured in the first-ever ANZ Climate Tech 100 list, a joint venture by Climate Salad and HolonIQ.

Six months ago, the two companies joined forces not only to create the ANZ list, but to build multiple lists region-by-region that will feature a total of 1000 companies around the world.

HolonIQ is a data company that provides intelligence around impact sectors, while Climate Salad aims to help companies building technology solutions to address climate problems too.

“The first is to index as many of the companies who are solving climate problems with technology as possible,” he says.

“Then it’s to understand what’s at stake, and what the industry looks like.”

Climate Salad and HolonIQ use machine learning to build up a taxonomy of what sub-sectors these companies play in, such as energy, agriculture or transport, Liubinskas explains.

The Australian list originally had 580 companies included, with data then used to shortlist those companies down to 150. Ultimately, the final 100 on the list came down to curation, he says.

Me and my investor: Bloom Impact Investing and Cyan Ta’eed

This representation across stages is shown with the awarding of both Bloom Impact Investing and Brighte onto the list, as “Bloom is starting and Brighte is scaling”, Liubinskas says.

The companies are also both founded by women, he adds, saying it’s important for the list to represent the entire ecosystem.

Other businesses on the list include agri-food startups such as Vow, v2food and Harvest B, as well as the likes of RecycleSmart and Goterra. 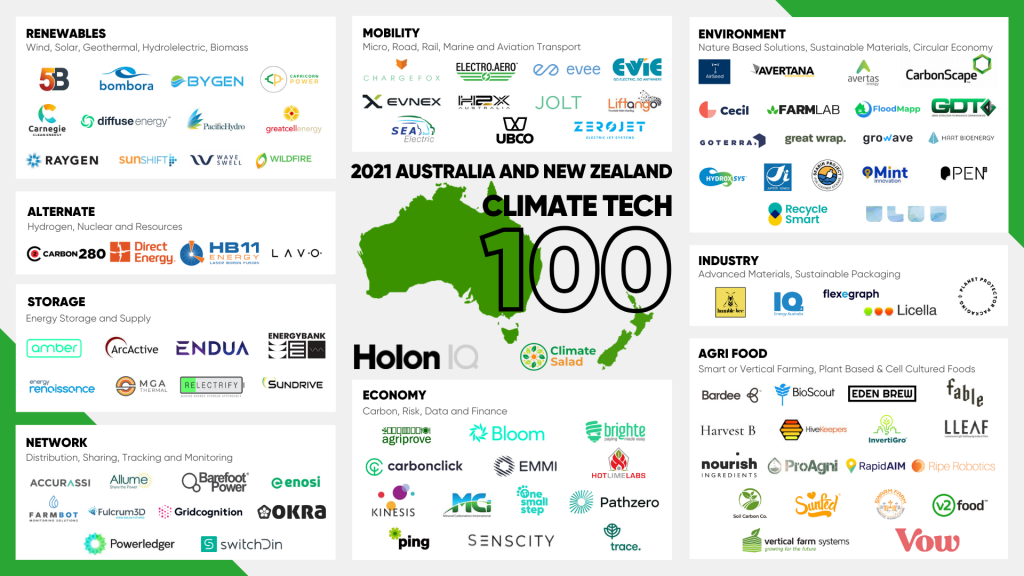 “Brighte is a financial business, but it has applied 99% of its working into sustainable products, like solar and batteries,” Liubinskas explains.

“So while they’re not a direct climate-impact company, they are actually facilitating significant climate positive impact by enabling thousands of people to get better access to renewable energy.

Q&A: Why Brighte’s Katherine McConnell was right to “bet the house” on renewable energy tech

“Bloom is similar in that there’s a massive drive from the whole world to invest in climate-friendly businesses and products, and for the average individual to do so too.

“It’s difficult to be an angel investor across those spaces, but Bloom hopes to give people the opportunity to participate by making investments into climate-friendly businesses through their platform.”

Giving people opportunity is something Climate Salad holds at the core of its own company, which Liubinskas says is a “community of people passionate about climate technology, and includes a lot of founders who are building these companies [on the list]”.

Liubinskas believes Climate Salad can play a huge role in helping these companies grow and create “a million more jobs”, which is why the team is currently working on its full list of 1000 companies across the world.

“We would like to get [the full list] out before COP26, and show the world that there is a really great range of technology companies growing globally and also right here, in Australia.”

Plus exclusiveExpert opinion: Why a lack of climate action will hinder your talent recruitment

If businesses don’t consider climate action, are they hindering their talent retention and recruitment? SmartCompany Plus asked ten HR professionals and recruitment specialists to weigh in.

Want to take action against climate change? Here’s where to start

Do companies actually know how to address climate change, or how to set and achieve sustainability targets that will keep consumers and investors on board?