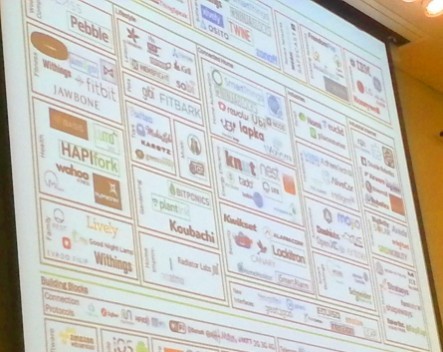 The rapid rise of digitally connected items, also known as the “internet of things”, was the key topic of discussion yesterday at Tech23, one of Australia’s leading tech start-up conferences.

Bartee and Zelinsky suggested the term had been coined in 1999, but the idea of digitally connected items had been around for decades, and is accelerating rapidly.

“Tech is converging and driving not only government business but broader society as well,” Zelinsky said. “We’re planning all of our systems going forward to be based around the internet of things. It will happen.”

The internet of things industry is expected to be worth $290 billion by 2017 and continue to grow at 30% each year after that, according to a report by Markets and Markets this year.

China has this year launched a special innovation fund of around $US800 million to support companies to move into this industry.

Birt, whose 14-month-old lighting system and light-bulb start-up LIFX raised $1.3 million through a Kickstarter campaign and has already generated $10 million in pre-sales in 25 countries via retail partnerships, said any start-up exploring smart devices should go for it.

“For any device that can be made smart and consumerised, there is a good chance there will be a market for this as there is consumer demand for these products,” Birt said, adding the success of their Kickstarter campaign took them by surprise.

“The proliferation and democratisation of the internet of things is really interesting and exciting, and in reach for all of us,” Birt said. “To see this explosion of technology, we’ve all come into this industry via tour computers and phones, but what we’re talking about is computers going back into everything else.”

Zelinsky added the defence force was constantly exploring new technologies, and he was hoping to collaborate and share those more in the future, as the evolving threats and opportunities would be significant.

“We are increasingly going to become more reliant on the internet, and the internet of things. That’s the trend. So we’re increasingly reliant on a vulnerable system,” Zelinsky said, listing cyber security, data integrity, and major civic systems such as communications, banking, energy and water could all be impacted.

“I’m very keen on supporting Australian industry and making sure we can be innovative and support entrepreneurs like Andrew. We’ve got the ability and the opportunity is there, and the opportunity to make the internet reliable and trusted is a big one.”

According to research by Intel, there will be 31 billion internet-connected devices by 2020.

Bartee said the first “internet of things” moment was during the Apollo program and it had evolved since then.

“There are many players in this particular ecosystem. It’s all about efficiency and doing things better,” Bartee says. “We won’t even hear the word in 10 years. It’ll be part of our society, part of the fabric. My son thinks I’m an idiot for keeping on talking about it.”

Birt said the internet of things was present in most industries, and revitalising the consumer electronics space LIFX was operating in.

“This is a hot topic in every market. There is a huge growth opportunity,” Birt said. “These devices will enable us to do a whole lot more in the future. We’re only just scratching the surface of what they can do.”