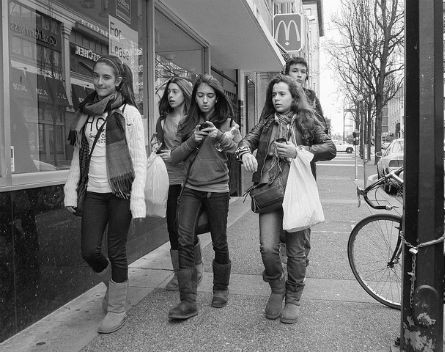 More teenagers are connected to the internet than ever before, but surprisingly adults are the ones spending the most time online, according to a study by Roy Morgan Research.

The research found while teenagers go online more frequently, they do not spend as many hours on the internet each month as adult Australians. In December 2013, teenagers spent an average of 14 hours and 42 minutes online, while people aged 18-54 spent on average more than 40 hours on the internet. Meanwhile, people aged 55 years and over spent as little over 32 hours online.

“As more and more people spend time on smartphones it’s very important for businesses to reach them,” says Ribeiro.

Eighty-nine per cent of teenagers have a mobile phone, according to the research, with 69% of mobile phone users having a smartphone.

Ribeiro said with the shift to mobile platforms, it’s important for businesses to think about the internet as a place where consumers shop around.

For example, when someone sees an advertisement on television, they might then go to the business’s website straight away for more information on their smartphone. If the website isn’t easily found or not functional, that could greatly affect whether or not they decide to go with a competitor.

“The reality is we expect to find products anytime, anywhere our way not the company’s way,” says Ribeiro.

“That’s a challenge for business. Mobile is right here right now, it’s happening whether brands like it or not.”

The research by Roy Morgan also found as children become older, the internet becomes a central activity for social interaction. Ribeiro says this shows how important it is for brands to have a social media presence. Having an active Facebook, Twitter or Instagram account can make a business seem more modern and attract a young generation of customers, he says.

“Teenagers are heavy users of social media,” he said. “The fact that you are there, it brings you into consideration.”

Ribeiro said his key advice to businesses thinking about launching a mobile presence is to think before making the jump.

“I tell them to audit or asses how ready they are for mobile marketing,” says Ribeiro.

“Go there, check you are ready for mobile – then begin with launching a mobile-friendly version of the website. Nowadays for SMEs it’s way more affordable.”