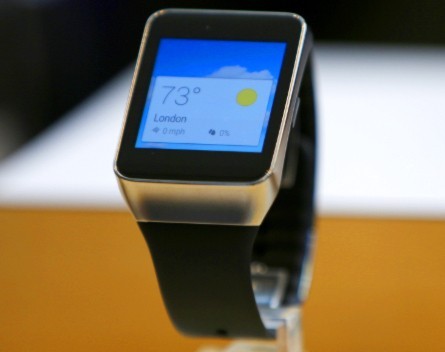 The operating system powers two devices so far: The Samsung Gear Live and the LG G Watch. A third device, Motorola’s Moto 360, is due out in the coming months.

So is this the operating system that is going to catapult Google into a leadership position in the wearables market, as it has done with smartphones? Will it succeed where other devices have failed?

A key feature of the Android Wear platform is that it automatically retrieves notifications from any existing Google app and displays them on your wrist.

Google also claims a range of apps specifically designed for Android Wear will begin appearing in the Google Play store.

In a very comprehensive review, Ron Amadeo from Ars Technica notes that genuine cross-platform support is something that’s difficult to implement. This means that, at least for the time being, you’ll need an Android smartphone or tablet to use an Android Wear smartwatch:

Like nearly all smartwatches, Wear devices rely on a Bluetooth-tethered phone, which needs to be running Android 4.3 and up. Running iOS or Windows Phone? You’re out of luck: no Wear for you. Smartwatches seem to be the ultimate ecosystem lock-in device. Samsung’s requires a Samsung phone, Google’s requires an Android phone, and we’re sure Apple’s will require iOS. There is so much cross-communication that needs to happen between a watch and phone that supporting multiple OSes becomes really hard.

On the upside, Amadeo also explains how Android Wear works with Android’s notification system, meaning it automatically works with most apps out of the box:

Android Wear data mines your phone notification panel and then creates its own interface on the watch. The thumbnail gets used as the background, the text is reflowed for the tiny screen, the app icon is pulled from the phone app, and each of the three actions (two buttons and the notification tap) get broken out into a separate action screens. The system’s swipe-to-dismiss gesture gets ported over, too.

This is what makes Android Wear so special. Because Google laid the groundwork for Android Wear one year ago with Android 4.3, the OS has out-of-the-box compatibility with most apps. Where most smartwatches need custom-built notification compatibility, what you see above is the baseline functionality for everything in Android Wear.

Joanna Stern from The Wall Street Journal likes the predictive notifications the watch gives you. However, at this point, there’s no way to customise which notifications appear on your device:

But what sets Android Wear devices apart from previous smartwatches is that they tell you what you need even before you realize you need it. Google Now, which mines Gmail, calendar, Web searches and other Google interactions, is a perfect fit for the wrist.

There’s simply not enough customization yet. Either I get buzzed every time someone emails me, or I don’t get any email alerts at all. Sure, the watch helps me look at my phone less, but I’d prefer a middle ground, where my wrist vibrates only when my editor or fiancée emails me. Mr. Singleton says Google is working on contact-specific notifications and the next version of Android, due out this fall, will have deeper notification controls.

Aside from notifications off an Android tablet, Android Wear integrates the Google Now voice recognition system. This means you can launch a range of commands by saying “OK Google” to your smartwatch.

This is a feature that impressed Fortune’s Jason Cipriani:

In addition to touch input, Android Wear supports Google’s speech recognition software. I’m happy to report that it takes very little time to fire off instructions like “OK Google, remind me to flip the steaks in 7 minutes.” The same can be done to search, compose an email or text message, set a timer, or even call a Lyft car with a Batman-eqsue, “OK Google, call a car.”

Over at Engadget, Brad Molen describes Android Wear as the most advanced smartphone platform so far. However, there are still some issues to overcome:

Android Wear is the strongest smartwatch platform we’ve seen so far, and it has enough support from manufacturers and developers to thrive. But it’s a first-generation product, and limited battery life, notification anxiety and other issues make it tough to recommend Wear quite just yet.

Meanwhile at Time, Jared Newman sums it up by describing the experience as still being a work in progress:

What we have now is a classic Google work-in-progress. The software needs more ways to surpass the abilities of users’ smartphones, and the hardware needs to get thinner, lighter and less clunky. (Motorola’s Moto 360 watch will bring some much-needed style to the lineup later this summer, but it’s not a panacea for bulky tech.) And while I’m not bothered by the one-day battery life of these watches, they need more convenient ways to recharge overnight, such as a wireless charging mat on your nightstand.

Should I get one:

With Apple heavily rumoured to be working on a smartwatch of its own, it might be worth taking a wait-and-see approach to devices powered by Android Wear at this point.

There are also a few rough spots that need to be ironed out, such as battery life, or the ability to prioritise notifications.

That being said, Android Wear appears to be a solid first effort by the tech giant, and it will be interesting to see where they take the technology in the future.