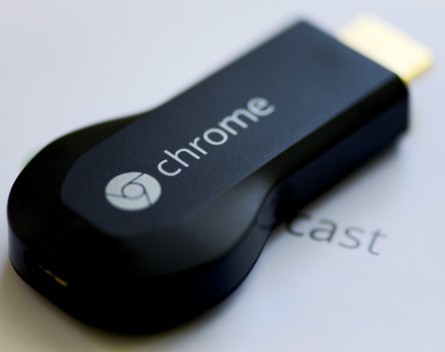 Telstra has confirmed it has entered into early stage talks about a potential Australian launch of Google’s Chromecast digital media player, which retails in the US for $US35.

Introduced in the US alongside Android 4.3 JellyBean in July of last year, although yet to see an official Australian release, the Chromecast is a digital media device that plugs into the back of a TV and resembles a USB stick in its form factor.

It allows users to view music and videos from selected online services, including YouTube, Google Play Movies & TV and Google Play Music, through their TV set.

The Chromecast can be controlled from a compatible Android smartphone and tablet, and was originally introduced as a replacement for the company’s ill-fated Nexus Q set-top-box.

A Telstra spokesperson told StartupSmart the telecommunications giant is looking at the device, while cautioning talks are still at an early stage.

“We are always looking at ways we can bring brilliant and innovative entertainment experiences to our customers and so will always explore and consider new technology that can deliver that,” the spokesperson said in a statement.

“There are no ‘secret talks’ with Google – we speak to Google all the time about all sorts of things.

“As we have said we are taking a look at it – but very early stages – if it’s a product/device that we will stock we will let customers know.”

The news comes just days after Google opened Chromecast up to developers, releasing an SDK (software development kit) for the device, which is available for download through the Google Cast website.

In a post on Google’s official developers’ blog, Google engineering manager John Affaki explains some of the device’s functionality for developers, in creating apps that play back audio or video, as well as for other potential purposes.

“You have many options for displaying content on Chromecast. For simple media applications, you can use the default media player that can play back HTML5 media content. You can also customise it with your own branding and style using CSS.

Affaki is also keen to explain the developer kit contains a range of pre-written libraries, making it easy to stream content from pre-written apps to the device.

“To make it easier for you to provide an optimized user experience on the TV screen, we have created sample apps for Android, iOS and Chrome. For Android, you’ll find a Cast Companion library to make your integration of Google Cast even easier.

“The Google Cast SDK is simple to integrate because there’s no need to write a new app. Just incorporate the SDK into your existing mobile and web apps to bring your content to the TV. You are in control of how and when you develop and publish your cast-ready apps through the Google Cast developer console. The SDK is available on Android and iOS as well as on Chrome through the Google Cast browser extension.”