We’re in the middle of a major shift: Google VP declares the “age of start-ups” 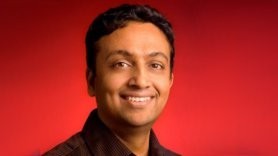 Australian entrepreneurs have been urged by Google’s global vice president of engineering to tap into a major shift taking place if they want going to propel their careers and Australia’s start-up sector forward.

“We’re in the age of the start-up. There has never been a better time in the history of the planet to launch a company,” Venkat Panchapakesan told hundreds of entrepreneurs in Sydney at the Startup Spring Festival.

According to Panchapakesan, technology, data and culture were converging in three key ways.

“Entrepreneurs need to look for fundamental shifts like this, where as nimble businesses they can move in and capture the business of the entire world,” he said.

“This is not a pipe dream. This is happening and there are companies trying to use these new problems.”

The global trend of computing transcending digital systems and linking to real-life objects used by everyone offered rich opportunities and new sets of problems for start-ups to explore and exploit.

“The everywhere, anywhere, everyone trend means the data is going to explode,” he said.

‘The problems we’re focused on have become much bigger than what Google thought when we launched in 1998.”

Panchapakesan outlined these three key changes for StartupSmart in the video below.

He added these converging trends were complimented by the rise of crowdfunding and companies such as Google offering their infrastructure, which made launching a start-up cheaper and more manageable than ever.

Citing the increasing uptake of mobile internet access, with 6.8 billion mobile phones in operation and 2.1 billion of those using mobile broadband, he said there was an increasingly massive opportunity for entrepreneurs focusing on this development and being ahead of the curve.

“It’s also about wearable computing. Wearable computing is arriving, and it’s arriving very fast,” Panchapakesan said, adding that the opportunity in Australia alone was massive, as 80% of Australians are connected to the internet and the country has the fourth highest mobile and second highest tablet penetration rate in the world.

He added that while globally scaling a business is never easy, entrepreneurs who are thinking ahead of the curve and paying attention to these emerging trends could launch major companies.

“I run Gmail, so I know how many messages we process each day, and I know growth isn’t easy,” Panchapakesan said. “The last 10 years has been the biggest ramp up of start-ups to billion dollar valuations. You could be doing that too.”