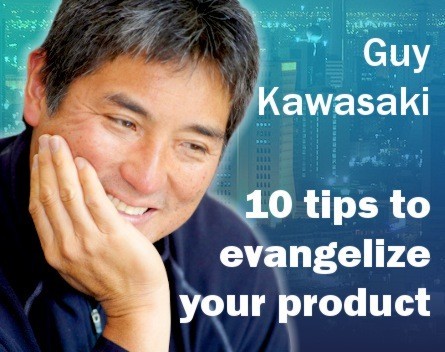 What is an evangelist and why does it matter for startup business?

As Apple’s original Mac evangelist, Kawasaki brings a wealth of experience when it comes to promoting products.

“I was at Apple in the Wonder Years,” Kawasaki jokes. “Every day we wondered whether the company would survive.”

History shows Apple did survive despite many troubled times and part of its success was the strength of its brand, built largely on the back of an army of dedicated fans. Raising that army is the task of an evangelist.

In Kawasaki’s view, evangelism is different from sales. “Typically the salesperson has his or her best interests at heart,” says Kawasaki.

“Evangelism is quite different; evangelists have others’ best interests at heart.”

Kawasaki breaks down the art of evangelism into 10 steps, which he defines as ‘bringing the good news’.

“It’s very hard to evangelise crap,” says Kawasaki. The key to being an evangelist is to promote something great. If the product is deep and captures customers’ imaginations, it becomes easy to extol the benefits.

An evangelist needs to tell the story of why the company or product exists. Kawasaki told of the iconic venture capital investor Mike Moritz’s criteria for putting money into venture – “I want to hear about two engineers making a product they want to use.” Tell that story.

Make the story relevant to the audience and pitch it to the individual. “Macintosh is about empowering one person to create a document they love,” explains Kawasaki.

Motor dealers know that letting customers drive the car is essential to making the sale and is something the software industry does very well with its trials and freemium business models. The customers are smart, so let them use your product and figure out how they can use it in their lives.

Don’t put barriers in the way of customers; convoluted forms demanding too much information finishing with things like CAPTCHAS – the codes you have to enter to confirm you’re human – get in the way of sign ups. Make it simple for customers to engage with you.

It is very difficult to get people to change religion, so don’t bother pitching to the competition’s fans or rusted-on users. “It was difficult to get MS-DOS people to switch to the Mac,” Kawasaki says. “They worshipped a false god.” If a potential customer doesn’t get it in five minutes then move on.

“People need proxies to make judgements,” Kawasaki says and he believes you should ignore those things, if they get it and they want to help then embrace them. Don’t get stuck on people’s titles or what school they went to.

The desktop publishing community saved Apple in the darkest days by encouraging groups of passionate fans in the design the company was able to keep going.

A third party product, Aldus Pagemaker, was Apple’s saviour. “If the market says that your computer is for desktop publishing, not for spreadsheets and databases. Take the money.”

An ecosystem means that others are interested in your success. Think of Apple iOS or Google Android without app developers. There are things you should share.

“I’m a big believer in karma,” says Kawasaki. “If people help you then you have an obligation to help them back.” By returning favours, people will help you out when you need it.

For Kawasaki, evangelism is a key part in promoting a business. For a startup, having evangelists telling your story is possibly one of the greatest assets you can have.