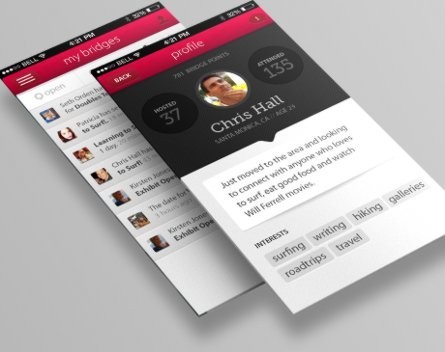 While many apps want users to spend all their time on their phone, social app Bridge is encouraging people to put down their phones and meet new people.

Based in Sydney and co-founded by brothers Paul and Michael Lutkajtis, Bridge aims to bring like-minded people together in real life.

Using an app available for both iOS and Android, users link their Facebook accounts to Bridge and then are able to connect with people by creating their own ‘bridge’ which can then be found on the apps map.

Say you’re looking for someone to go for a hike with, the app lets you create a ‘bridge’, then other users looking for a partner can connect and you can organise a hike together.

Co-founder Paul Lutkajtis says he and Michael came up with the idea because they were both looking to meet people, because many of Michael’s friends were doing shift work, and Paul had just moved back to Australia after living in the United States for a few years.

“I was looking to rebuild my social circle,” Paul Lutkajtis says.

“It wasn’t just people who shared similar interest, but also had a similar schedule.”

Since launching in April, Bridge has around 8000 users in Australia and the United States and has created close to 5000 ‘bridges’.

“We’ve seen quite a few revolving around fitness,” Lutkajtis says.

“Tennis partners, workout partners, running buddies, but there’s the business side of things as well.

“People that want to meet people who work in a similar industry and talk shop over a drink or two.

“It’s very broad, which is great as well, because it allows people to see that wide spectrum of things out there.

“We think it’s the missing link in the sea of dating and social apps.”

Development began on Bridge 18 months ago, and so far it’s been self-funded, in about four weeks’ time Lutkajtis says they’ll be running a kick-starter to fund “the next stage of growth” and build awareness.

He says the company will likely look at developing corporate partners in order to monetize the app, but for the time being they’re focused on gaining traction.

“It’s all about building the user base.”