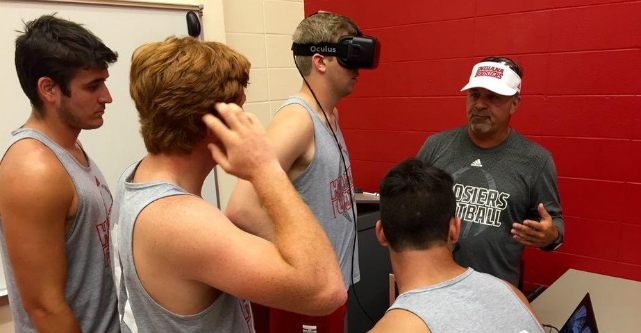 Virtual reality (VR) appears ready to take the entertainment world by storm in 2016.

In addition to the much-hyped Oculus Rift, major corporations such as Facebook, Sony and Samsung are poised to release high-quality VR headsets to the public this year. After years of VR being discussed as the “next big thing,” this may be the year consumers will be able to get their hands on actual products.

It turns out some athletes have already begun exploring the promise of VR. Sports teams – both professional and collegiate – are taking advantage of the unique qualities of VR video to understand games in new and unique ways.

Stanford’s STRIVR system, for example, provides services for its teams as well as for Clemson University and several NFL teams.

As a researcher and teacher of new media technology in sports journalism, I have had my opinion on VR changed dramatically over the course of the last year.

My initial feeling was that VR was little more than a new fad that would fade, along the same lines as 3D television. But after using the technology and seeing its applications, I have changed my mind completely on it. VR technology is a radical departure from traditional video presentation, and it has myriad applications in both consumer media and in athletic practice.

We are already seeing certain sports take advantage of these applications. At the Mark Cuban Center for Sports Media and Technology at Indiana University, five sports teams actively use VR, including men’s basketball and football. According to Cuban Center videographer Patrick Dhaene, that number is expected to double next year.

Coaches and players have been using regular two-dimensional video for multiple generations, generally relying on a wide camera angle to capture the entirety of a formation or play. This can make players feel distant from the material they are studying.

With VR, however, the player is able to put on a headset and experience a play from a much closer vantage point – as if they are inside the play as it takes place.

A quarterback wearing a VR headset can take a simulated snap and physically turn his head left or right in real time as the play progresses, helping him learn both the progressions of his wide receivers and the positioning of the defense.

Players can use VR to help memorize plays and formations without having to step onto the field, by repeatedly watching different aspects of looped plays within the VR headset. Coaches enjoy the benefits of players using VR to experience play repetitions, without the potential for injury that comes from being on the practice field.

The video that athletes and coaches see in a VR environment is constructed differently than normal video. Providing the user with an immersive environment requires different types of lenses and cameras, and computers must aid in production.

The typical VR video consists of footage from multiple cameras, shooting and recording in sync with each other. These cameras are generally fastened to a “rig” that holds the cameras in place. The rig is then anchored to a pedestal, allowing it to remain motionless during filming.

To make a VR film of a football practice focused on the offensive side of the ball, for example, the camera rig is stationed near the quarterback in the backfield. Each play is then run as normal, with the quarterback taking the snap, going through his progressions and making a pass.

Once the practice is over, the real work begins for the video crew.

For each play, a VR producer must assemble the footage from all the cameras into a single 180- or 360-degree visual field, a process known as “stitching.” This is arguably the most important part of the VR process, as improper stitching can render the video unusable.

After a play is properly stitched, players can view it through a VR headset, allowing them to concentrate on different areas of the play. Quarterbacks can even turn their heads away from the line of scrimmage and watch themselves throwing the ball, in order to evaluate their mechanics.

Academic research on the effectiveness of VR-aided sports training is still in its preliminary stages. Comments from both college and professional athletes who have experienced VR-aided training have been almost uniformly positive.

But only now are scientists entering a stage where broader adoption of the technology will allow proper evaluation of the mental and psychological impacts of VR.

There are certain limitations to VR in the sports training environment. Camera rigs and production computers are expensive to purchase and difficult to learn how to use.

Rigs generally must stay stationary during filming, because moving rigs tend to produce video that causes motion sickness in users. And the need for a pedestal makes capturing in-game VR footage for instructional purposes difficult.

Furthermore, VR isn’t a panacea for real-world practice. Using VR-aided training is unlikely to lead to consistently perfect throws or defenders who sniff out every play before it starts.

However, the comments from players, coaches and VR specialists show a tremendous amount of potential, allowing players an unprecedented perspective on the game that extends on-field practice time into the film room.

As the technology continues to mature, we should expect the teams using it to be operating with a competitive advantage.

Galen Clavio is an associate professor of sports media and the director of the National Sports Journalism Center at Indiana University, Bloomington.