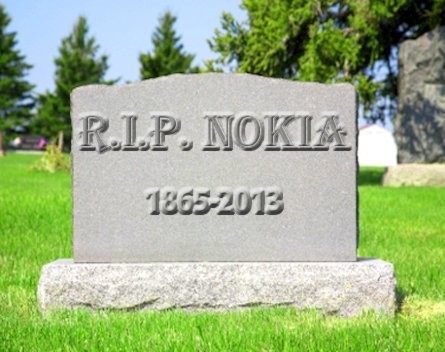 Remember back in the 1990s and 2000s when practically everyone owned a Nokia? How Snake was pre-loaded on most phones, while replaceable mobile phone covers were at discount stores everywhere?

Remember how polyphonic ringtones were the next big thing? Or how you swore you’d never buy a phone with a camera, let alone a colour screen?

Back then, who would have predicted that Nokia would now be dead as a mobile phone company? That it would sell the remains of its mobile phone division to Microsoft for a paltry $US7.2 billion? Or that there will almost certainly never be another smartphone released with the Nokia brand ever again?

They’ve been bought out by the people who brought you Clippy. And Microsoft Bob. And the Zune. And the blue screen of death. And the red ring of death. And pressing the ‘Start’ button to shut down your computer. And repeatedly reinstalling Windows 98.

Now, even if you aren’t in the mobile business or selling a mobile app, there are some clear business lessons here.

And, contrary to popular myth, it wasn’t Apple’s 2007 entry into the smartphone market that killed Nokia. At least, not directly.

Consider the numbers for 2010. Nokia was clearly outselling Apple in the smartphone market. That year, Apple’s annual sales for iPhones grew by 22 million units to 47 million. Research in Motion’s BlackBerry sales grew by 13 million to 48 million. Meanwhile, Nokia grew by 36 million new smartphone users to 104 million.

So how in blue blazes did a company end up being sold for just $US7.2 billion just three years later?!

There’s already a conspiracy theory out that Nokia’s chief executive and former Microsoft employee, Stephen Elop, purposely tanked the value of the company so it could be sold cheaply. While old Taskmaster likes a good UFO tale as much as anyone else, this one isn’t plausible.

According to mobile industry expert Tomi Ahonen – whose presentation you should have watched yesterday – Elop made two key, fatal errors that killed the company:

The first is called the “Ratner effect”. The Ratner effect describes the tremendously damaging effect a company executive criticising their own products can have on sales. After all, if you don’t have confidence in your products, why will your customers?

It’s named after a British businessman who caused his jewellery store chain to collapse by flippantly saying in a speech: “We also do cut-glass sherry decanters complete with six glasses on a silver-plated tray that your butler can serve you drinks on, all for £4.95. People say: ‘How can you sell this for such a low price?’ I say: ‘Because it’s total crap’.”

In Nokia’s case, Elop decided to switch to Windows Phone in February 2011. In the process, he abandoned all of the company’s existing smartphones, as well as its yet-to-be released next-generation MeeGo platform.

Nokia’s Ratner moment came in a leaked February 2011 internal memo – known as the “burning platform” memo – which likened the then-current situation of Nokia in the mobile phone market to a person standing on a burning oil platform. Jump, or stick with the existing platforms and burn alive, the staff were told.

No surprise, telco and consumer confidence in the company almost immediately erupted in flames.

The second is called the “Osborne effect”. The Osborne effect is when a company pre-announces an updated product, causing sales of its existing products to slow or stop as consumers wait for the newer version. It’s named after a computer company that went bankrupt in 1985 after pre-announcing a new model.

In Nokia’s case, its first Windows Phones didn’t arrive until November 2011, despite being announced in February.

Worse, the company made it clear, when it released its first MeeGo smartphone in September of that year that it would be abandoned just two months later – and no other phone would ever be based on the platform!

For obvious reason, between February and September, the company’s sales flatlined, and never recovered. After all, who wants to upgrade to a soon-to-be abandoned “burning platform” phone?

The lesson from Nokia’s tragic death is simple. Don’t be too eager to announce your products or put your products down. If doing so can kill a giant like Nokia, it can easily kill your start-up.