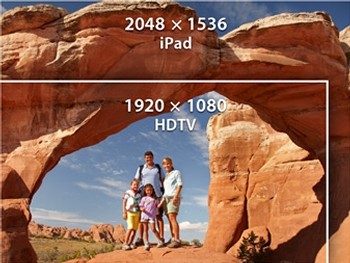 Apple chief executive Tim Cook took to the stage at a keynote event in San Francisco this morning where he debuted the company’s latest product, a new 4G version of the iPad with a high-resolution “retina” display.

The tech giant also confirmed an update to the Apple TV set-top box, a move rumoured for several weeks, while it also announced the iOS 5.1 software, which will bring additional language support to Siri and the Personal Hotspot feature.

The device – which is called just “iPad”, suggesting a shift away from numerical updates – is set to launch in the United States and Australia on March 16, at the same price point as the previous model.

It’s set to be the biggest worldwide launch in the company’s history and is the first time Australian users have seen a new gadget arrive so quickly.

“Today we’re announcing the new iPad, and it is amazing,” Cook said.

The new device sports the retina display found in the iPhone 4 and 4S models, with a 2048×1536 display and 3.1 million pixels. “The most ever in a mobile device,” vice president of worldwide marketing Phil Schiller said.

The gadget is only slightly thicker and heavier than the previous version, at 9.4mm and 1.4 pounds. Component leaks suggest this is due to the components needed to power the high resolution screen.

The iPad is also being powered by an A5X processor, a step-up from the chip found in the iPhone 4S, although not the A6 processor some analysts had been hoping for. That’s likely to come later this year.

However, it also said the device is now running quad-core graphics, which will be essential to support such a high resolution display. The company also claimed 40% better colour saturation for the new device.

Several app developers took to the stage to show off their updates apps – the new graphics and high resolution screen have created new opportunities for developers in every category, including visual art and games.

Some game developers showed off how the new graphics processor will allow them to create graphics similar to those developed on major home consoles, such as the PlayStation.

Chris Cheung from Autodesk, the creator of Sketchbook, showed off a drawing app that is now able to use much more bright and distinct colours than in the iPad 2, using the retina screen.

The iPad is also now a next-generation wireless device, with Schiller announcing the gadget will now run on 4G LTE networks. Download speeds will be improved significantly, allowing users to open files from emails, videos and other web links much, much faster.

However, although Telstra already operates a 4G network it’s unclear whether the device will be supported locally. At the very least, it will operate on current 3G speeds.

The next major new feature includes what Apple calls the iSight camera, which uses a five-megapixel illuminated sensor on the back, IR filter and ISP. That’s similar to the camera found in the iPhone 4S, and should help quash criticisms of the iPad’s low-quality lens.

The device also uses face detection, and will now be capable of recording in full 1080p – Apple has obviously updated the Apple TV to support the new high quality recordings on its mobile devices.

The iPad also features voice dictation, with the device now coming with a microphone. This isn’t the full-blown Siri we’ve seen in the iPhone 4S, but is more of a taste of what will probably come in the next version. Australian language support is included.

Battery life remains the same, with 10 hours and nine on 4G networks.

The new gadget will also cost the same as the previous model:

Meanwhile, Apple confirmed the rumours and produced an update for its Apple TV set-top box. The device now sports a slightly new interface that appears more iPod-like, and is now able to support 1080p films and television shows.

Not only with this allow users to download films in full-HD, but they’ll be able to stream content from their high-definition iPads and iPhones.

The Apple TV now also allows users to access their iTunes playlists from iCloud, while it was also announced iCloud now supports movies, which can be downloaded or streamed to any device – including the new Apple TV.

The new devicew will be available on March 16 as well, along with the new iPad.

…and some other bits and pieces

Tim Cook, who is now appearing more and more comfortable on a keynote stage, announced some impressive figures. Apple has now sold 315 million iOS devices in the past year, with 62 million of those just in the fourth quarter.

The company also now has 352 retail stores, with 110 million visitors just in the December quarter.

And the products Apple calls “post-pc” are now making up three-quarters of the company’s overall revenue.

“We’re talking about a world where the PC is no longer the centre of your digital world,” he said.

“A world where the devices you use the most need to be more personal and more portable than any PC has ever been.”

There were a few other minor updates. The iWork apps have been updated for the retina display, while Garage Band now has the ability to update to iCloud, along with a Note editor and a new “Jam Session” mode.

iMovie also received some nice updates, including storyboards and new editing options. And Apple introduced iPhoto, which allows users to edit and play with their photos, while a new feature allows users to beam pictures between devices.