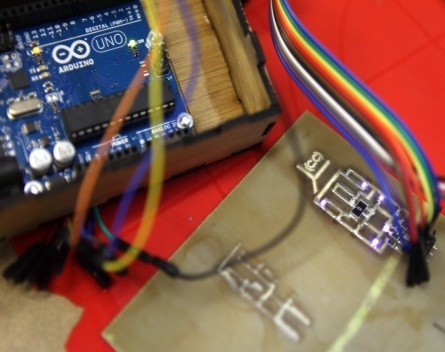 Since its Argentum desktop 3D printer was successfully funded on Kickstarter last year, Brisbane startup Cartesian Co has been working hard to ensure it doesn’t disappoint its backers.

The Argentum is able to print circuit boards, and since raising $137,356 on Kickstarter last year, over $100,000 more than their $30,000 goal, the team has been working to get their product to consumers.

Cartesian Co was co-founded by long-time friends John Scott and Ariel Briner, and Isabella Stephens, who the duo met at university.

“A lot of kick-started companies fall over during the period following their Kickstarter ending and getting their product out, or there are long delays,’’ Scott says.

“We’re completely focused on getting the first version of the printer ready to ship.”

When the Argentum Kickstarter campaign ended on December 12 last year, Scott expected sales to drop off, but that hasn’t been the case.

“The Kickstarter market is the early adopters. Until people really get their hands on the product, most people are pretty hesitant to put their money down,’’ he says.

“Through the Kickstarter campaign we sold around 100.

“Since the end of the Kickstarter we’ve just been continuing to make sales through our web store.

“We’ve made a few sales a week through that consistently.

“We think it shows real enthusiasm.”

The trio came up with the idea for the printer while working on engineering projects and realising just how convenient it would be to have a 3D printer that could quickly make prototype circuit boards.

Currently it’s only possible to do that getting one professionally made, a process that could take up to two weeks, and the only other option is to make it yourself, which Scott says is quite labour intensive and requires a fair bit of skill in order to make circuit boards that are actually useful.

It was only recently that they realised the application could be much broader.

“There’s another whole segment that are interested in making things like wearable tech, making flexible circuits, flexible displays, that’s something that we’re excited to see where it goes,’’ Scott says.

“Useability is hugely important to us because our audience – and we have looked into that a little bit – are mainly makers, small business and universities.

“We wanted to include everyone, from a beginner to a pro user.”

The team received initial support from Brisbane accelerator iLab, but has not yet started actively looking for investors.

Scott says the printer is on schedule to ship to buyers in about two and a half months’ time.