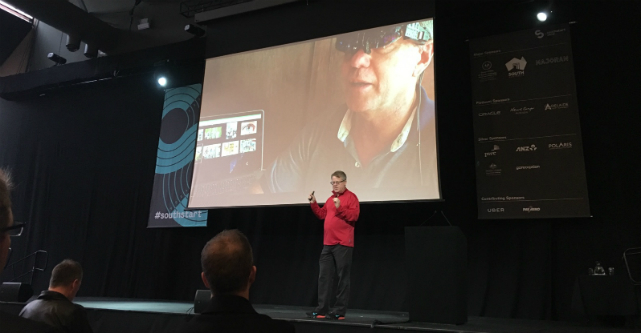 Robert Scoble is one the world’s leading tech bloggers and has access to some of the most exclusive demos in leading-edge technology.

In his keynote speech at the SouthStart conference in Adelaide, Scoble outlined the disruptive tech emerging before our very eyes that will not only change how people do business, but will create new opportunities that entrepreneurs should be jumping on today.

The night before his keynote speech, Scoble was in Israel where he saw a camera system that categorises things as you see through it.

“It starts learning from us and it’s watching us,” he says.

“We’re gong to map out this world very quickly when we get these new augmented reality glasses.”

This tech combined with the likes of Magic Leap will be ground breaking, he says.

Magic Leap raised $1.3 billion last week and is expecting a new round soon to be led by more Chinese investors.

“But they do have a fantastic new optic system.”

Other virtual glasses like Microsoft HoloLens are creating more and more advanced features that let users experience the physical world with holograms through multiple sensors and virtual items.

There are three other advanced hologram glass products being built and Scoble predicts it will change the landscape of journalism, gaming, business education and more.

This tech will allows users to instantly visualise 3D maps and charts, bring up virtual screens and control these with their bare hands.

“It fools your mind into thinking it’s real,” Scoble says.

“This new world is going to be controlled by our eyes.”

Scoble says there are nine companies around the world building augmented reality glasses today that are taking immersive tech to the next level.

“Within three to five years, we’re going to have a pair of glasses from one of nine companies that’s going to do this kind of stuff,” he says.

Scoble was able to try out Facebook Occulus Rift at a demo, which let the user play table tennis with someone else on the other side of the world.

He also saw it bring executives to tears when they were immersed in a Syrian refugee camp.

“I’ve never seen a product cause emotion like this product,” he says.

“I’ve never seen a product cause fear and vertigo like this product.”

Scoble says his favourite VR headset is HTC Vive which comes with controllers that let users build and create the space around them in 3D.

“We’re very close to getting Magic or VR experiences from your mobile device,” he says.

With the rise of new tech comes the inevitable debate about jobs, Scoble says.

“How many jobs these are going to kill?” he says.

With the development of driverless cars, there won’t be a need for Uber drivers, he says, and with that there will be less demand for trauma surgeons, traffic police, tow truck drivers and replacement part manufacturers.

But there are always new jobs, he says.

Before ending his tour in Adelaide, Scoble visited Paris, Tel Aviv and London.

On his Paris stop, Scoble visited the Eiffel Tower with a small VR business.

At the top of the tower, while they were being guided to all the major attractions of the city, their VR headsets allowed them to pick and enter sites like the Notre Dame or the Louvre.

“You can go into those places and see which ones you want to see in those next two days,” he says.

Scoble also discovered a South African doctor who has used virtual reality to revolutionise her therapy and improve the performance of elite athletes.

She does so by taking them through a 10-minute virtual reality game that helps fix specific problems in their performance like missing a ball from a particular angle.

“She found a way to hack her brain and make her eyes work better,” he says.

Emerging virtual and augmented reality programs are changing how we build, design and create.

It has been used in China to design Disneyland and by Ford to create upcoming cars, he says.

“And it’s leading to a whole bunch of new businesses,” Scoble says.

StartupSmart attended the SouthStart conference as a guest of Brand South Australia.