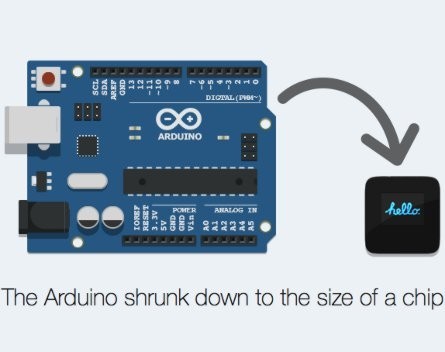 Australian electronics company Geek Ammo has caught the attention of close to 1500 backers on Kickstarter just four days after its launch, nearly exceeding its goal of $25,000 by four times.

Its product, called MicroView, is a chip-sized Arduino OLED (light emitting diode display). Arduino is a hugely popular “open-source electronics prototyping platform based on flexible, easy-to-use hardware and software”. It is commonly used in robotics and the Internet of Things.

What makes the tiny MicroView so revolutionary is that it’s the first Arduino compatible board that let’s you know what it’s thinking without the need to connect it to a computer, something that was necessary up until now.

The OLED display can then be used to create games, smiley faces, dashboards or just about anything that designers can come up with.

A short video on its Kickstarter campaign looks at a number of ways Microview can be used.

The founders originally came up with a pin that lights up so users would know the Arduino was working, but this new product takes the idea a whole lot further.

Geek Ammo CEO Marcus Schappi, formerly at Ninja Blocks, says the products is “for geeks” who play with Arduino, including artists, designers, hobbyists and would make it much easier for teachers working in electronics and robotics.

By being able to do big runs with Kickstarter funds, Geek Ammo hopes to keep the cost of the MicroView down to $45 (including worldwide shipping).

Schappi says it was important to keep MicroView affordable so it remained accessible to artists, designers, educators, inventors, engineers.

He says Geek Ammo would like to be able to create about four Arduino products a year. At the moment his preference is to bootstrap the company rather than take investment.

If you’re still wondering what Arduino can do, meet Pinokio, brought alive by servomotors and an Arduino to a desk lamp:

“Pinokio is an exploration into the expressive and behavioural potentials of robotic computing. Customized computer code and electronic circuit design imbues Pinokio with the ability to be aware of its environment, especially people, and to expresses a dynamic range of behaviour. As it negotiates its world, we the human audience can see that Lamp shares many traits possessed by animals, generating a range of emotional sympathies. In the end we may ask: Is Pinokio only a lamp? – a useful machine? Perhaps we should put the book aside and meet a new friend.”