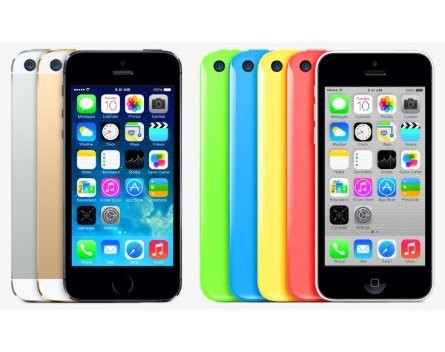 Apple fulfilled all expectations last night when the company debuted two new versions of the iPhone, including a high-end model with a fingerprint scanner and a lower-cost, plastic version in a variety of colours – both of which are set to be released in Australia on September 20.

But despite the release of a model which could help the company recover stronger growth rates in the potentially lucrative Asian and South American markets, the company’s shares dropped over 2%.

Investors are most likely disappointed in the lack of a surprise at the event, given Samsung’s recent debut of a smartwatch – a category in which Apple is said to be experimenting.

Apple marketing chief Phil Schiller showed off the long-awaited lower-cost 5C model last night. Internally, the model is similar to the iPhone 5, with better battery life and one key difference – it’s built of plastic instead of aluminium.

“The business has become so large,” chief executive Tim Cook said. “We’re going to replace it with not one, but two new designs.”

Marketing chief Phil Schiller said the gadget was “made with all the incredible tech that customers love with iPhone 5”, and even addressed the fact the design was leaked online before the event.

The 5C is essentially replacing the iPhone 5, which will be discontinued.

“It has an incredible new design – one that’s more fun, and more colourful than anything we’ve made before,” Schiller said.

In a call-back to the iMacs of the late 1990s, the device comes in five different colours – green, white, blue, red and yellow. Most importantly, the device is built with plastic. In fact, design chief Jony Ive said the phone was “unapologetically plastic”.

The device appears the same as the iPhone 5, but the guts are completely new, with a faster A7 chip that Apple claims will boost the device’s speed by 100%.

But more importantly, the iPhone 5S features fingerprint scanning technology. Users take advantage of the scanner, fitted under the home button, in order to unlock their phones, make purchases and confirm other actions on the device.

“We have so much of our personal data on these devices, and they are with us almost every place we go, so we have to protect them,” Schiller said last night.

The technology, called Touch ID, is built right into the home button, although third-party developers won’t be able to access the technology for now.

In addressing privacy concerns, Apple said a user’s fingerprint won’t be sent to any cloud-based server. Instead, they will remain lodged on the local device – although whether users will accept that explanation remains to be seen.

The device features the same 4-inch Retina display in the iPhone 5, along with an improved 8 megapixel camera. The new camera also features the ability to shoot slow-motion video, and a burst-photographic mode.

The iPhone camera is regarded as one of the best in the industry – continued advancements will ensure the company remains on top in that regard.

Apple has released pricing for both new iPhone models, although mobile carriers have yet to reveal their own plans, which will likely be cheaper as they often include no up-front costs.

Early perceptions of the devices have been positive, although analysts question whether Apple has enough traction in the new devices to make a break into potentially lucrative developing countries.

Apple also said the new iOS software, iOS 7, would be available on September 18.