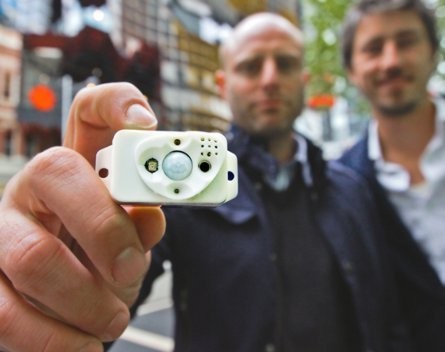 The iAwards are one of Australia’s leading innovation awards programs focused on the information and communications technology sector.

Organic Response is a responsive and efficient lighting system launched last year and already installed in eight locations across the world, including Australia and the Netherlands.

Co-founder Chris Duffield told StartupSmart he and co-founder Danny Bishop wanted to create a smarter and simpler way to install lighting systems so they could reduce energy usage across the world.

“Right at the start, we identified the impact this could have on energy consumption globally. Around 20% of all electricity goes towards lighting, so it’s a huge opportunity if we can reduce that,” Duffield says.

“We wanted to create a light that is simple enough to use across the world, regardless of access to engineers for upkeep.”

Duffield and Bishop have been developing their idea for just over three years, after noticing how complex, expensive and inefficient existing light systems were. Duffield’s background is in finance and Bishop’s in electronic engineering research and development.

“The problem with existing systems is they are incredibly complex and expensive. You’d walk into a zone and all the lights go on at 100%,” Duffield says. “Because we have a sensor in every light, we can make sure every light is putting out the right amount of illumination to complete the task beneath it. This can save up to 70% of your energy.”

Organic Response installed a proof of concept site in the Commonwealth Bank offices in Sussex Street, Sydney, in June. They installed energy metering prior to the system switch, and had the energy saving of 56% verified by an independent global engineering firm Arup.

With plans to have a worldwide impact on energy use, Duffield says they’ve pursued a commercialisation strategy of global partnerships so they can scale as rapidly as possible.

“One of the areas that is particularly important for start-ups is our commercialisation strategy. Rather than establishing our own sales team and trying to compete on a global stage and get market share, we’ve provided a limited number of leading light technology companies our technology, so we’re mobilising their sales forces,” Duffield says.

He says these partnerships mean by the end of 2013 they’ll have 80 to 100 fully trained sales staff promoting their service in Australia and 200 to 400 in Europe. The Organic Response team is eight full-time staff workers, and 10 contractors.

“We looked for how to develop a huge team efficiently, so we could get what we see as a really revolutionary tech out to a bit market by sharing it,” Duffield says.

Duffield adds while they’ve gone to market as a lighting system company, their real asset is the infra-red information cloud created by the light system, which can be shared with third parties and new technologies such as ventilation and heating.

“We really see ourselves as is a company that creates and disseminates real time occupancy information,” Duffield says.

“When you’re sitting under the system, there is a lot of data in the form of infra-red signals moving around the space using the information cloud. At the moment we use this information to manage the lights. But this has a lot of value for office applications like lift shafts, blinds and workspace options.”