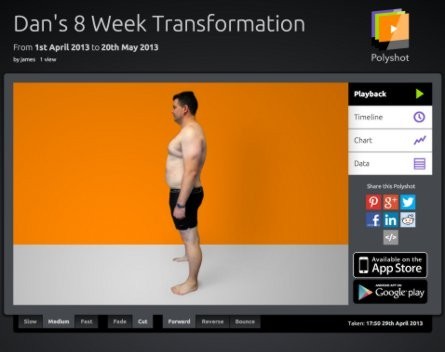 A new app that tracks body transformations has been welcomed by the fitness industry, with several gym franchises signing partnerships.

“People needed a way to capture how they’re changing towards their transformational goal in a range of ways, both visual and data,” Harris says.

“Sometimes your data changes but your body doesn’t, or the other way round. This captures both so you know where you’re up to and stay motivated.”

According to Harris, over 300 people have downloaded the app since the soft launch on July 1. Many of these early adopters are personal trainers, and users have the option to keep the data completely private or share it.

“You can keep it to yourself, or you can share it with your trainer or social media networks,” Harris says. “A lot of apps force you to share, but it’s an option with us.”

The Polyshot team of four is currently working on Polyshot Pro, another version of the app for personal trainers which will allow them to keep and track multiple clients without having to log in separately to all the independent accounts.

The Polyshot team has signed agreements with the Australian networks of international franchises Kosama Fitness and Genesis Fitness, as well as Snap Fitness in Australia and New Zealand. These franchises are promoting the app for free, as a value add for their clients.

“They see it as a value-add, to get people engaged earlier and to use it,” Harris says.

The app, available on iPhone and Android, is $1.99, a price deliberately selected above the average 99c price for iPhone apps.

“We didn’t want it to be treated as a novelty app. We wanted our customers to pause and think about buying it, and use it seriously,” Harris says.

He says they haven’t worked out the number of sales required to break even, although he estimates it would be several thousand.

“The app isn’t really about money for us. If we were about the money, we’d charge a higher premium price or use advertising and we didn’t want to do that.”

The Polyshot app works with American and British weight systems. It is already available in English and Portuguese.

“Our vision is to have it in 10 languages by the end of the year,” Harris says, adding they chose Portuguese first given the strong fitness industry and culture in Portugal and Brazil.

With plans to take the app international, Harris says getting the design right so it appeals to both men and women has been a major challenge. He adds they spent months testing and researching a range of possible logos and colour combinations.

“We wanted to make it very useable. The health and fitness market is not the most tech-savvy and that’s fine, but it’s on us to make it work so it’s quick and easy for everyone,” Harris says.