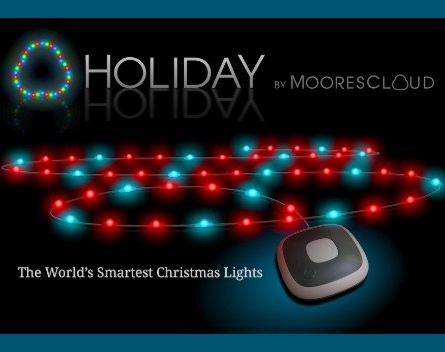 They may look like Christmas lights – and they are – but MooresCloud lights are the results of hundreds of hours of musing about the future of technology and the coming transition to “the internet of things”.

“We’d been talking about the internet of things for a long time, and we realised we could turn this into a business and product,” says co-founder Kate Carruthers.

Carruthers, who will be speaking about product development at Melbourne conference Products are Hard, told StartupSmart this transition had been coming for over a decade.

“We’re still in the first generation of the internet, which was about connecting pieces of text together via hyperlinks, and that was really powerful,” Carruthers says. “But for the last 10 years, we’ve been talking about how the next generation is about moving the connectivity from text to things.”

She adds the ability to connect and control real life items remotely via the internet is a game-changer.

“Things are and will become connected, responsive, and contextually aware,” Carruthers says. “It really does open up a whole new way of thinking about technology. The other thing that converged and coalesced with this is commodification of hardware. In the past it was possible but too expensive.”

Carruthers, who has a background in software development and internet communications technology, told StartupSmart the move into developing software configurable hardware products was even more challenging than she anticipated.

“Hardware is really hard. I’ve spent a lot of time building software products and thought they were hard, but this is way more challenging. If we built this wrong, we could burn your house down. My software has never done that,” she says.

Learning how to communicate effectively with professionals from other niche backgrounds in order to iterate towards a shared vision was the hardest part.

“Software developer conversations are hard enough already, but when you’re trying to bring industrial designers and hardware engineers into the process, it’s tough-going,” Carruthers says, adding they underestimated how many discussions they would need.

“The ambient conversations were the really powerful ones that led to the best insights. It was a big learning for me; it’s true in software but more true for hardware. You have timelines that can’t be moved, so you need to make the right decisions in time to meet the production deadlines,” Carruthers says.

MooresCloud are selling their lights directly, and have almost sold out their first run. Carruthers adds they’re hopeful they can organise another run before Christmas.