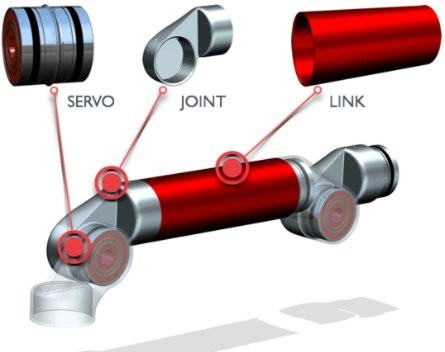 When Daniel Pizzata and Adam Ellison were offered the chance to present their industrial quality robot building blocks start-up ModBot at leading international tech conference the Consumer Electronics Show, they scrambled to incorporate their company and get across to the US in time.

They did. Speaking to StartupSmart from Las Vegas, the pair have been overwhelmed with advice and interest from people across the robotics industry after their presentation during TechCrunch’s Hardware Battlefield event.

“Everyone keeps telling us that America is tapping the robotic industry as the next trillion dollar industry, especially at the high end of the scale. We’re further down towards consumers, and heaps of people have reached out to us, so it’s been very validating,” Ellison says.

The ModBot product is a series of robot building blocks common to most robots.

“From humanoid to spider-shaped, any useful robot you want to build will use some of these parts,” Pizzata says.

Likening the toolkit to Lego, Pizzata says their primary goal for presenting at the event has been to start developing a community for their testing, upcoming crowdfunding campaign and launch.

“Our goal is to raise awareness of the concept and get the tech community excited because this project is going to require a lot of collaboration. We want the maker movement involved as they’re the early adopters who will build the early impressive projects so other people can understand and get excited,” he says.

Ellison adds the biggest challenges they anticipate will be marketing ones.

“The consumer robotic market is so new, so the first big challenge is explaining the possibilities and triggering other people’s imaginations about how they could use it.”

Pizzata and Ellison have both worked in robotics companies prior to launching the start-up this year, and have been developing the idea for three years.

They are planning a crowdfunding campaign for around $100,000 and a seed funding round shortly.

“We’re going to do both. Our capacity to reach a very large audience is making us very popular over here and there has been investment interest,” Ellison says.

“The crowdfunding isn’t so much for capital, it’s about marketing, validation and triggering ideas. This was one of the big reasons we jumped at this opportunity to come to Vegas and present at CES. We need this community to get behind it before we start so the crowdfunding campaign works.”