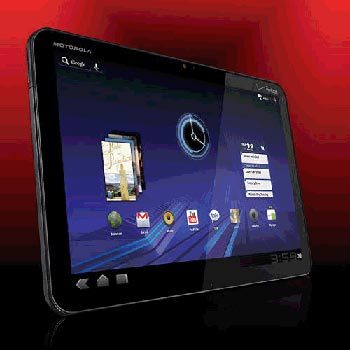 The Consumer Electronics Show is gadget heaven. Every year major manufacturers pull out some of the most powerful (and wacky), pieces of technology for attendees and have the chance to show off some of the most impressive and futuristic pieces of hardware ever seen; it’s the biggest tech event of the year.

But with so much to review, there’s no way anyone can find out everything for themselves. With that in mind, we have compiled a list of the top 10 gadgets to come out of this year’s Consumer Electronics Show in Las Vegas.

If there’s one tablet that has the ability to challenge the Apple iPad, it’s the Motorola Xoom.

Featuring the long-awaited Honeycomb software, (the version of Android specifically designed for tablets), the Xoom combines a slick user interface with such powerful hardware that it has already taken out multiple “best of show” awards.

The Xoom is an impressive piece of tech. It features a 10.1-inch screen, a 1Ghz dual-core processor, 1280×800 resolution, WiFi, 4G connectivity, two cameras, 720p recording and 32GB of internal storage. Battery-wise, Motorola brags it can support 10 hours of video.

But it’s the Android 3.0 Honeycomb software that has a lot of people interested. With users able to buy apps from the Android marketplace and take advantage of some slick user-interface designs, the Xoom appears to be quite beginner-friendly.

Google says the Honeycomb software will work so well because it’s designed specifically for tablets, and so far, they appear to be right. Menus load quicker, graphics are richer and the entire experience is much more user-friendly.

Motorola says the Xoom will launch during the first quarter of the year, and few other details have been released. But in a market now saturated with newcomers, the company has clearly demonstrated that it has what it takes to stand apart.

The first of the 4G smartphones arrived this year, but the most interesting one was undoubtedly the Atrix. Motorola promises this phone is “the most powerful smartphone in the world”, and despite the marketing hype, features some impressive hardware.

The gadget features an Nvidia Tegra 1Ghz processor, 1GB of RAM, 15GB of storage capacity and a four-finch qHD display. It even comes with a fingerprint recogniser.

But perhaps the best feature of the Atrix is the ability to connect it with a type of dock that looks exactly like a laptop, with a keyboard and a few connection ports. The phone then turns into a fairly low-scale laptop, but allows the users to perform a variety of functions just as if they were using a computer.

It can also be connected to a normal desktop with a special dock, enabling users to control the smartphone as if it were a normal computer.

The Atrix also comes with an HDMI port, which you can use to plug in to an HDTV or other type of displays.

The Atrix is definitely a powerful phone on its own, but the ability to sync up with a laptop dock makes it that much more powerful.

There are always a few gadgets that turn heads simply for being a bit “out there”, and Sony has taken out that title this year with its new Headman unit.

The gadget itself looks like something out of a Star Trek film. Users hold up a type of thick visor to their eyes. Inside the gadget are two OLED screens that are projected onto a surface that gives the user the experience of actually sitting in a cinema.

The gadget also features a type of augmented surround sound, so users have the full experience of watching a film in their own private cinema.

It looks sleek too, with a white finish and flashing blue LEDs to highlight the rims.

Unfortunately, it’s highly unlikely this product will ever see the light of day. Sony isn’t giving up any pricing or release details, and the physical structure of the device – you have to hold it up to view films – makes it an unlikely candidate for release.

Nevertheless, the Headman remains one of the coolest uses of technology at this year’s CES.