How virtual reality is bringing a new dimension to conservation 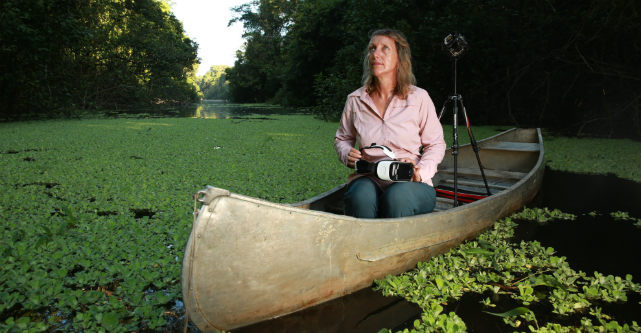 Virtual reality technology is introducing a new dimension to wildlife conservation by helping researchers anywhere in the world assess the conditions of distant species and environments as if they were on location.

The first application has been to better understand the environment of endangered jaguars living in the Peruvian Amazon.

This information is being used to improve mathematical and statistical models that predict abundance and location of jaguars, as well as population trends and threats.

The eyes of researchers

The jaguar (Panthera onca) is currently classified as near threatened. But a lack of information on jaguar populations poses a barrier to conservation efforts.

So researchers from the Queensland University of Technology and the Lupunaluz Foundation recreated areas of the Amazon after painstakingly stitching together 360-degree video footage.

The footage will enable researchers and policy makers anywhere in the world to don a VR headset and experience the location as if they were there.

The study is unique by bringing together new virtual reality technology, local and international knowledge, and mathematical and statistical expertise, to form a strong predictive model of jaguar populations, behaviour and movement.

Professor Kerrie Mengersen, from the Queensland University of Technology, who led the expedition, said virtual reality enabled experts to enter an immersive environment so they could identify characteristics of areas where jaguars are likely to live.

“Because we can’t take these experts to these inaccessible places, how could we take these places to them?” she said.

The team filmed 360-degree video using multiple cameras, including six GoPro Hero 4 camreas, and sound recording devices. The technological set up was crucial to reconstruct the Amazon with the greatest degree of fidelity possible.

“We had a series of 360 degree camera systems, like hacked versions of GoPro used to capture video,” said Associate Professor Tomasz Bednarz, also from the Queensland University of Technology, who was instrumental in the set up of the project.

“We also had recording systems to capture the sounds of the environment from all directions.”

“The experts needed to know about the type of rocks to make any judgements about habitat suitability for the wallabies, and it is that degree of small scale detail that was really hard to obtain in our computer generated environments,” Mengersen said.

“But immersive environments using 360-degree photos and video can give us that.”

The virtual reality footage from the Amazon enabled experts to identify tree species that jaguar would frequent or fruiting species that would attract their prey.

The information will be used by the Lupunaluz Foundation and the big cat charity Panthera to guide policy decisions and to help establish “jaguar corridors”. These are safe roads of passage between fragmented sections of the jaguar’s habitat.

Bringing the natural world to the people

Dr Megan Saunders, a marine ecologist in the Global Change Institute at the University of Queensland, said virtual reality technology could help engage the public with conservation issues.

“It has the potential to explain to people the importance of preserving the environment,” she said.

One similar project is the XL Catlin Seaview Survey, which uses 360-degree imaging to monitor coral reefs around the world in the form of high-resolution panoramic images, which are made available to the research community.

The most recent expedition was to Heron Island to survey the widespread coral bleaching on the Great Barrier Reef.

“These tools can bring the natural world to people,” Dr Saunders said. “Virtual reality has the potential to bring usually inaccessible areas to people who have the power to make decisions and achieve positive change.”

Ivy Shih is an editor at The Conversation.