Want to invest? There’s an app for that 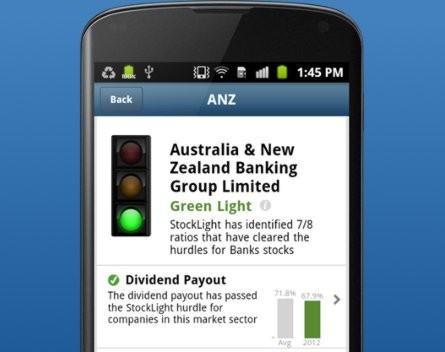 Founder Jason Kotchoff says the StockLight app, available on Android and iOS, has had over 18,000 downloads. It allows investors to track the stocks of their choice and provides information on stock prices, dividend rates and qualitative research.

It’s aimed at a growing number of older Australians with self-managed superannuation funds as well as young professionals just entering the world of investing.

“We recently launched some new filtering tools in the app and they allow a user to rank stock on the Australian Stock Exchange based on price-earnings ratio, dividend yield and StockLight ratios,’’ he says.

“It’s stuff that a retail audience in Australia hasn’t had access to.

“In addition if a company you’re following has a price sensitive announcement, that PDF will be delivered straight to your phone with a push notification.”

The app was developed after Kotchoff read Benjamin Graham’s The Intelligent Investor – a book lauded by Warren Buffett as a must read for investors – and realised much of its advice could be automated.

“It offers how you can invest using all these fundamental techniques, which involve a lot of calculations from balance sheet data from publicly listed companies,’’ Kotchoff says.

“I’ve been working very hard on bringing those ratios into a stockmarket app, so the app itself has 10 ratios for 2000 different companies on the ASX that are a calculated on a rolling basis.”

StockLight is currently generating revenue based on a freemium model.

“Money is one of the things we considered from day one, it’s an important thing all startups should be thinking about,’’ Kotchoff says.

“What we figured out was there are avenues to generate revenue, one was in-app purchases, and for an app I think it’s really important you have a free download.

“In-app purchases with a freemium model are something that’s a lot more accessible to people.

“So one revenue driver for us is we have in-app purchases, we give away functionality for free to some extent, but charge for continued usage.

“The other revenue stream is we’ve developed a relationship with Intelligent Investor whereby their product, a premium advisory service that costs up to $800 a year, has a free two-week trial with StockLight.

“If a StockLight user converts to a paid member of Intelligent Investor we get a commission.”

Kotchoff says in less than a year StockLight has led to a 25% increase in new business leads for Intelligent Investor.

“It’s absolutely exceeding expectations for them, we’re responsible for a ton of their new business,” he says.

The company has had interest from investors, but Kotchoff says it’ll only make the move when it feels it’s the right match.

“The technical team for StockLight want to try and maintain ownership for now, until we can find investors well suited to our own business,’’ he says.

“We’re not in the game to make money for the sake of it. We want to take smart money.”