How virtual reality will change the face of ecommerce 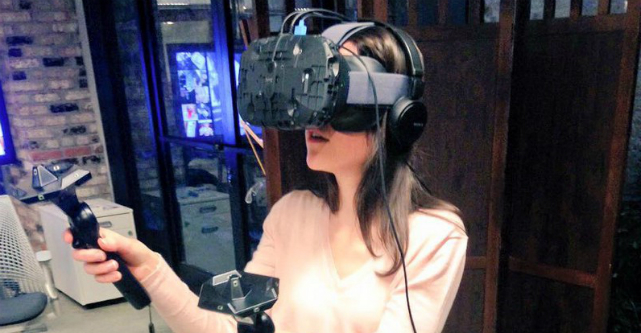 A few weeks ago, I attended the Shopify Unite conference in San Francisco and was fascinated by one thing in particular: the virtual reality display.

Including a VR display was a great touch — it shows that Shopify is keeping an eye out for important industry trends. The Shopify CEO, Tobi Lütke, is incredibly passionate about VR, and I have no doubt he’s positioning his company at the forefront of the coming vCommerce (virtual commerce) movement.

Tobi is right to see big potential in VR. I’m not alone in that opinion either: Giants like Google, Amazon, Alibaba, and Facebook are getting into the market one after another.

If VR hasn’t been on your radar thus far, take a closer look at the next big thing that will sweep the world. The VR wave is still a few years out but it will arrive faster than we expect — so start preparing your business to thrive in a new, fascinating virtual landscape.

Since I operate in the commerce space, I’m intrigued by the applications of VR and augmented reality for online transactions.

The first question we might ask about ‘vcommerce’ is: Do the consumers want it?

To me, the numbers point to “yes.” Here’s a statistic from WalkerSands Communications’ Reinventing Retail 2015 report:

More than a third of consumers (35%) say they would shop more online if they were able to try on a product virtually … and 63% said they expect it to impact their shopping experience in the future.

There’s more: Digi-Capital predicts the AR and VR market will hit $150 billion by 2020. AR and VR will “grow new markets,” they say, and “cannibalize existing ones”.

If you’re skeptical or on the fence, I recommend giving vcommerce a second look. Brilliant new technologies have a habit of sneaking up on us, upending entire markets against the predictions of industry veterans.

Many people predicted in 2007 that the iPhone would fail miserably; from our present-day vantage point, we know the iPhone revolutionized the cell phone industry and helped make smartphones ubiquitous.

Consumer demand seems to be growing for vcommerce, and the market seems to be ready for rapid growth. But will vcommerce replace eCommerce?

The short answer is: Probably not. Many industry observers think vcommerce will be incredibly useful but also believe it will operate alongside existing sales channels instead of immediately replacing them.

It will fit into an omnichannel user experience for online stores around the world — people will love VR for shopping, but they’ll also continue to shop through mobile devices, desktops, and brick-and-mortar stores.

Now, whether vcommerce will overtake eCommerce remains to be seen. Dan Virgillito wrote for Shopify that “it’s too early to make conclusions” and I agree.

The one thing I can say now is virtual reality should definitely be on your radar and you should definitely start preparing for it. Check in on vcommerce news periodically and keep evaluating whether you need to upgrade your website for VR and AR. There’s a good chance we’ll all need to make improvements sooner than we think.

What will VR and AR for online shopping look like?

This is where we can have some fun speculating how vcommerce will operate.

My friends at VRCommerce think it will mostly have customers enter special rooms or pop-up stores to buy products. Once putting on headsets, customers will enter virtual rooms with four walls, and then they can proceed to browse items in the virtual world.

I’d like to see consumers immersed in virtual locales related to what they’re buying. For example, say you want to buy yoga gear. It would be really fun if you could put on a headset and go to a virtual yoga studio to shop for your apparel and equipment.

Perhaps you could buy cycling gear while watching the Tour de France on TV — perhaps you’d be whisked away to a virtual store right next to the race itself. Or you’ll visit a model home virtually, during which time you can buy a couch you see that would look great in your own house. On the latter point, IKEA is already doing something in this realm: The company recently partnered with video game developer Valve to create a VR kitchen you can enter using the HTC Vive.

I believe VR and AR will transform experiences for consumers in online shopping, just like it will do so for gaming. Ccommerce is a win-win for both store owners and consumers: The quick experience makes it really easy to make purchases, so retailers move product faster (and at higher volume) and customers don’t have to wait to buy their favorite items.

The possibilities for vcommerce are simply astounding. In time, I’m certain innovative companies will introduce new ways to shop online that will surprise everyone and delight consumers everywhere.

Sure, we can dream about the possibilities with vcommerce, but at the end of the day we have to figure out how exactly vcommerce transactions will transpire.

Say you have a VR headset on and you’re shopping for items. How will you actually purchase the items and check out?

One possibility is using a sort of two-step process:

I think we can do better. I’d love to see eye-tracking technology inside VR headsets that can help you make selections and purchase items seamlessly. Eye-tracking in VR is a growing trend, and it’ll be only a matter of time before we can use it for vcommerce.

Eye-tracking for vcommerce could work brilliantly. For example, there could be a buy button on the top-right of your headset screen. You’d look at the button, and the system will ask you to confirm your purchase. You’d flit your eyes to the “yes” button, and just like that, your items will be on their way to you.

Retailers who reduce purchasing friction for their customers sell more. That has been true for a long time, and it’ll be true well into the future. Even with the magic of VR and AR, checkout needs to be completely frictionless (see:Amazon’s brilliant one-click ordering innovation), otherwise customers will drop off the sales funnel.

Luckily, VR and AR might allow us to create seamless sales processes for consumers.

If we place everything consumers need right in front of their eyes — stunning visuals of merchandise, clear answers to questions, and easy checkout options, for example — online stores everywhere can enter the coveted realm of sky-high conversions.

Start preparing your business for VR and AR

We all know it’s dangerous to get complacent, especially in the world of business. There are always innovations around the corner just waiting to take the planet by storm.

Virtual reality and augmented reality are great examples. They’ll revolutionise gaming and online shopping as we know it, and there’s a good chance they’ll reshape other industries as well.

Although it’s a little while away, start thinking how you will incorporate VR/AR into your business for the upcoming movement — then watch as the industry astounds you. What will we see next in VR and AR? It’s anybody guess. But the innovations will captivate us and transform our lives for years to come. I, for one, can’t wait to see what’s coming.