When Napthine announced Wi-Fi for regional areas, these entrepreneurs jumped on board 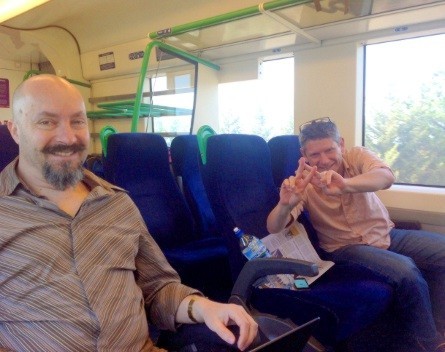 Late last year two Melbourne Hub members, Nathan Dyer and Jake Puhl, jumped on a V/Line trip to Bendigo with the idea that they would get out of the city and create a “regional pop-up hub” for the day.

Their spontaneous trip was part of an increasing global phenomenon of a “reverse commute”, where city dwellers make it out to regional areas for the day.

Up until now, limited Wi-Fi infrastructure made that difficult, but in Victoria at least a recent announcement by Premier Denis Napthine for improved internet and mobile coverage in regional areas has changed that.

Napthine said free Wi-Fi will be available to passengers on several key V/Line train services. He said the package would also be used to reduce mobile coverage blackspots across the state.

Hub member and futurist Julian Waters-Lynch says the opportunity was there to re-invigorate innovation in small towns.

“As yet co-working is really a city phenomenon and building up these pockets in regional areas is a way of making sure that young people don’t feel the need to leave these areas to act on innovation,” he says.

“We’re hoping that more and more people will visit emerging communities and help build them up as centres of innovation.”

Waters-Lynch says that the train journey itself could be used to hold moving hackathons with just better access to power sources needed to make it happen.

There has already been some talk of holding a TedX on a train.

“There’s something about moving that adds a whole new element to it,” he says. “Making TedX a journey is an interesting idea.”

The other big benefit these regional areas offered entrepreneurs, in particular startups, is the lower cost of living compared to the city.

“I’ve thought about whether small towns could host startups at a particular stage of their growth,” he says.

“The idea is not to move startups out of the city, but give them a chance to experience something different – that can unleash a lot of creativity too,” says Waters-Lynch, who commutes between Clunes and Melbourne CBD.

“For me, that switch evokes a different kind of thinking and I love what each setting brings,” he says.

While Wi-Fi on V/Line trains is still a while away, there’s no stopping the entrepreneurs wanting to seize the opportunity and try out reverse-commuting right now.

A second trip to the country has already been made by Hub members who caught a train to Bendigo, inspired by the original trip made by Dyer and Puhl. A third trip to Geelong was made today.

Waters-Lynch says he is aiming to hold a hackathon in a regional town this year.