“We don’t have time”: Why fashion label Elk is baring all in its quest to become more sustainable

The well-known Melbourne clothing and accessories brand had just released its first transparency report — a forensic look at Elk’s entire supply chain and business operations that showed not only the company’s progress to becoming more sustainable, but also how far it had to go — and Goding says she was terrified of what those messages might say.

In the report, Elk held a microscope to its business and documented its social, ethical and environmental impact. But any fears about how the report would be received turned out to be unfounded.

Instead, the report sparked numerous positive conversations with customers, while others were surprised that Goding and partner and co-founder Adam Koniaras had opened up as much as they did.

Genuine transparency is a rare commodity in business, but the Elk team has doubled down on its commitment to being transparent by releasing its second transparency report last month.

Speaking with Goding, it’s clear she truly sees no alternative but for the business to be completely honest, especially in what she describes as a world consumed by a fast-paced media obsessed with betterment and comparisons to the seemingly perfect lives of others.

“I think that what this world can’t afford and what our environment can’t afford is false claims,” she tells SmartCompany.

“We can’t afford anything other than the truth because we have so much work to do, and it’s a very scary position we’re dealing with in terms of facing mass extinction, and who knows what humanity is going to look like.

The bigger picture here is about more than the Elk business. That picture starts to take shape when Goding describes the “lovely conversations” the two transparency reports have started with others in the fashion industry.

These people have felt able to approach Goding and Koniaras with their own sustainability challenges, or “hard questions” as she puts it, quite simply because the co-founders have been willing to share.

“It’s a really nice, sort of passive position to be in. To allow and to foster conversation, and I think that’s really what’s important at the moment because none of us have this completely figured out,” she says.

“Even the big guys who have got massive teams, they’re still figuring this stuff out. But the willingness is there and the commitment’s there, and I think that’s the heart and that is that passion.”

The 2020 Elk Transparency Report was originally intended to be released at the start of 2019, but the COVID-19 pandemic meant the business needed to take a “side-step” from its release as it focused on surviving the lockdown periods, and supporting its international suppliers, which are still grappling with the global crisis.

The report leaves no part of the Elk wholesale and retail business untouched — from the materials used in Elk products (the use of organic cotton increased by 23% in 2019), to who makes them, how they are packaged, the recycled and low impact materials used to fit out the Elk stores and the solar panels that are now providing electricity to those stores.

Then there’s tree planting efforts, volunteer days for Elk’s 109 employees, and plans to implement diversity training for the management team.

Importantly, the report includes a full list of Elk’s tier one suppliers, as well as an expanded list of its tier two, three and four suppliers. It also features a list of preferred materials for its design team to use when selecting fibres and materials with the least environmental impact. 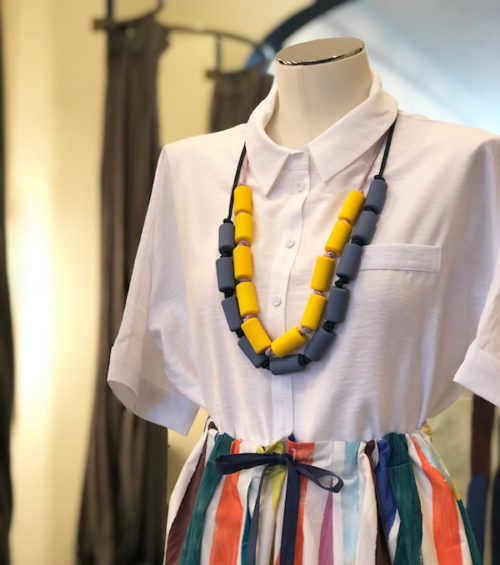 Elk’s transparency report includes a list of preferred materials for its clothing and accessories. Source: supplied.

The 100-page report is detailed, but it’s by no means a perfect scorecard. Rather, it reads almost like a map to the sustainability journey that the Elk team has been on in earnest for the past seven years, and in some ways, since the business was founded 17 years ago.

Elk’s efforts stand out at a time when larger fashion businesses have once again been called out for unethical practices in their supply chains, and the business has received industry recognition, including as the recipient of the inaugural Sustainable Innovation award at the 2019 Australian Fashion Laureate. The business was also a finalist in the 2019 Banksia Foundation Awards.

In some way, it’s a validation of Elk’s approach to sustainability, but it’s clear Goding believes the journey has really only just begun.

“In the grand scheme of things, you think about the industry of fashion and textile manufacturing and clothing production — it’s ancient, it’s thousands of years old,” she says.

“So, what modern-day fashion is asking a very traditional industry to do is to peel it away very very quickly, and to change and challenge the norms that they’ve worked on for such a long time.

“There is just an enormous amount of technology that is going to take years to develop, and so the journey will be infinite. I don’t believe that there’s an end date to it.

“But I think what is really important to remember is that we have to expedite it. We don’t have time; we have this sinking feeling of the clock’s ticking and we need to make changes very, very quickly.”

Stop clinging to the belief that you ‘don’t need to worry’ about sustainability; the fate of your business might depend on it, writes Paul Elsibai.

It’s a long way from managing events at Melbourne Zoo to running a globally successful jewellery and clothing label. But...