As the backlash to single-use products grows, BYO reusable coffee cups have become popular among busy office workers looking to enjoy a takeaway cup of coffee without adding more waste to landfill.

But in a coffee-loving nation, the flaw lies in the simple fact that not everyone has a cup on hand when a caffeine craving hits.

That’s a problem The Cup eXchange co-founder Marty Rowell set out to solve using a system that’s growing in popularity around the world: the circular economy.

What is the circular economy?

As climate change pushes environmental concerns to the fore, the concept of the circular economy is gaining support among brands and consumers.

A circular economy — as opposed to a linear economy — aims to end the continual use of Earth’s finite resources by eliminating waste.

Under a circular (or ‘closed-loop’) model, production is made more efficient while the environmental impact is reduced.

“We can produce many things while also reducing the amount of waste we produce”, Professor Michele John, the director of the Sustainable Engineering Group at Curtin University, explains.

“If we’re producing any waste we look at how can we include that waste back in the original production system.’’

‘The world as our warehouse’

Rowell and his brother Jeremy hit upon the idea for a circular-economy coffee cup after watching the ABC’s popular War on Waste program in 2017.

To illustrate the sheer volume of waste going into landfill every day, the show demonstrated that the 50,000 single-use coffee cups disposed of every 30 minutes in Australia were enough to fill an entire Melbourne tram.

“My brother Jeremy and I really looked at that and saw it was a big problem, but the call to action was to bring a container in and demand a 30 cent discount,” Rowell explains.

“And we thought that wasn’t really fair on the small businesses … It’s not their fault that there’s no better solution than these paper cups.

“So we thought about it hard and said, ‘well, how do we stop the waste by having a better system?’”

The brothers dismissed the idea of simply “trying to make a better cup”, as that “doesn’t solve convenience for the user”.

“You only want the cup while you get your coffee, then you want it to disappear.’’

Instead, they decided to treat takeaway cups as an “inventory management problem”.

Rather than “making more stuff” they would “treat the world as our warehouse”, Rowell says. 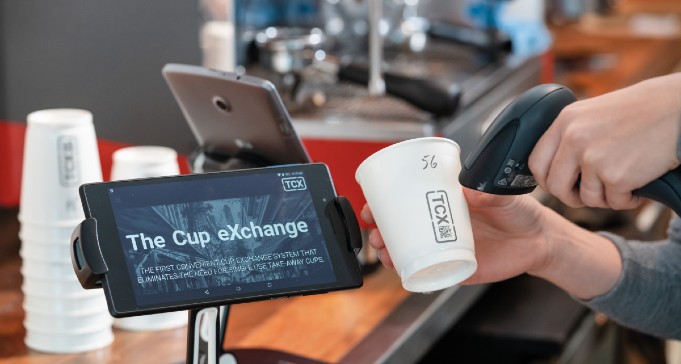 A “library of cups”

The Cup eXchange works like a library system. A customer becomes a member and is able to borrow from a “library of cups” when ordering their daily coffee, Rowell explains.

Each cup has a unique identifier — a QR code — that is scanned before it leaves the cafe and linked directly to the customer’s account.

When they’re finished with their coffee, the customer leaves the cup in one of a number of dedicated deposit boxes in the vicinity, where it is collected, washed and returned to the cafe.

The system is environmentally friendly and economic. “The cost-per-use comes right down and is much, much lower than a paper cup”, Rowell says.

“What we’re doing is tracking products, and whoever the custodian is at that point in time,” he explains.

“Rather than ownership, it’s custodianship. It goes round and round.’’

This piece was first published by The New Daily.

NOW READ: “The Trivago of coffee”: How Barker St is drawing customers away from the big supermarkets, without competing on price

Reads like a great idea but think about it…..
All the responsibility of disposing, scanning, explaining, recycling, washing and even singing Advance Australia Fair.

Every coffee supplier should supply their retailers with a sort of small shredder.
Customer can bring in an empty cup, get a 15c rebate and the shredder can turn it in to compost.

Or the neurotic can bring in the reusable cup. and just feel like they are saving the planet. That’s reward enough for them.

Help. I work 60 hours a week and then spend 20 hours a week pontificating what waste goes in what colored bin.
Yep there’s a problem bigger than all this, it’s called empathy, walk in other peoples shoes, it is what it is.