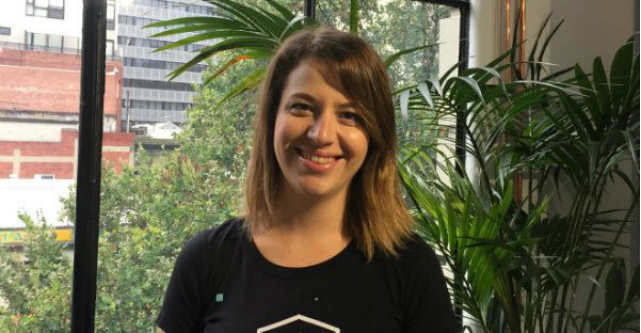 For a woman who once questioned why anyone would want to work with computers, Laura Molony has built a curious career: it’s wall to wall computers.

After completing a degree in commerce in Auckland Molony joined NAB [National Australia Bank] as a business graduate.

Throughout the program she particularly enjoyed stints working in the realm of digital innovation which provided the platform for her career in tech.

She now leads a product team at Versent, a Melbourne based IT consultancy, for a product called Stax that was initially brought to life by three cloud-savvy employees who were frustrated with the uncertainty and lack of visibility surrounding cloud deployments.

They brought it together in a short period of time and now compete with global companies far bigger.

She doesn’t code, she doesn’t like star wars and she loves working in technology.

How does it all fit together?

In her words, connecting people and translating technology to what the customer wants and vice versa, is her sweet spot.

We asked Laura more about her career here.

Has your tech career been planned or did it just happen?

“I remember sitting in ‘Infosys 101’ at University and thinking ‘why would anyone work with computers?’.

“But then I learned more about technology and creating products for people to use when I left and realised some sort of career in technology was for me.

“I completed the graduate program at NAB and met some great people and role models.

“I started working in the ATM team, then the digital team and now I’m at a fast-growing IT consultancy building a technical product for IT Managers called Stax.

“After a few years, I recognised that there is a whole industry of intelligent, fun people who build technology products and that I could contribute something to that industry.”

What qualifications (if any) do you have that support you in this role?

“I studied Commerce – Marketing and Management at the University of Auckland and beyond that I’ve done some agile training.

“Other than that, it’s really been experience that supports me and learning from those much more talented than me.”

Do you know any coding languages, is this relevant to your career?

“No I don’t. I haven’t needed to and I don’t plan to learn how to code either.

“What I have learnt is understanding how the building blocks of technology fit together and how that impacts the user experience we’re creating.

“I’ve had a few moments in my career when I thought that I needed to learn to code, but the reality is, I’d be a terrible coder.

“I’m much better at connecting people, at translating technology to what the customer wants and vice versa.”

What’s your proudest achievement so far in tech?

“Launching our new tool Stax to the world earlier this year.

“In about six months, we built a new product and brand and launched at AWS [Amazon Web Services] Summit.

“This small team in Melbourne is now competing with companies who have been building similar products for many years.

“It feels great to be the new kids on the block and having built a product that customers really need – especially in such a short period of time.”

Why is diversity so important in the tech sector?

“Because customers and users of technology are diverse!

“And I think that’s great.”

What do you want all girls and young women to know about careers in tech?

“That it’s not all so technical!

“The majority of my role is about people – working with customers, stakeholders, my team – and facilitating the right conversations.

“You don’t have to be a self-identified ‘nerd’ to work in tech either. I think some girls think that if you don’t love Star Wars, you won’t fit in.

“I’ve never seen Star Wars, and I don’t plan on changing that.”

What do you personally do to raise your profile and voice as a woman in tech?

“I get involved in product or design meetups, I attend conferences.

“But really, that’s because I enjoy what I do, and I want to get better at it.

“I like to think that I should do those things because I’m passionate about my industry, not because I’m a woman.”

How can we get more women speaking at technology-related events?

“Continue to promote tech as an industry that woman can thrive in.

“Ask women to speak about things that aren’t about ‘being a woman’, but about being awesome at what they do.”

Can you run us through an average day in your life?

“We start the day with a standup every morning, so the whole team is across what we’re working on, issues can be raised and fixed to keep things moving.

“The rest of my day really varies. I could be helping scope product features, testing the product, doing sales, account management, developing support content, working on marketing initiatives … the list goes on.

“The product manager role in a startup is really broad, which is why I love it.

“You need to be able to juggle many things at once, all while keeping an eye on moving in the right direction.”

What more would you like to see the tech industry doing to better support women in the field?

“I think we’re heading in the right direction – continuing to create environments that support women, acknowledging that there is a gap to close and being open to talking about what that means.

“But most of all, ensuring that women are promoted and talked about, because of the great work that they do, and not simply to fill an agenda item about being a woman, because that’s what we’re ‘supposed’ to do.”

Finally, who are your tech-related role models?

“There are a couple of women and men who I’ve worked with in previous roles, who encouraged me to move into digital and technology and learn how to recognise the value I can bring to the industry.

“They continue to inspire me, along with the myriad of very smart people I work with every day at Stax and Versent.”