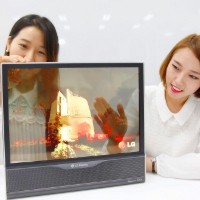 LG Electronics has announced it is working on an OLED (organic light emitting diode) display technology that is both flexible and translucent.

According to a report in South Korea’s Electronics Times, the consumer electronics giant hopes to unveil a product based on the technology next year.

The technology is the product of a joint research effort by LG and the South Korean government agencies, as well as 36 universities and private research institutes.

The company claims its flexible display panel can be rolled up to a radius of just 3cm without breaking the display.

The screen is based on a polymide film, rather than glass, and is 30% transparent, compared to just 10% for similar LCD-based technology.

The researchers have been able to develop a display 18-inches in size, with a HD display resolution, with hopes of building a 50-inch rollable TV at some point in the future.