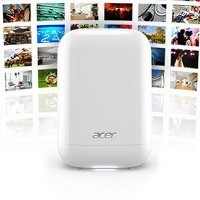 Napoleon complex or just a micro-PC exposing other devices in its category as naked emperors? The Acer Revo One RL85 is another device heralding the new age of convergence tech, combining multiple functions into the one compact hub that acts as home media centre and PC all in one.

This discreet and stylishly designed hub can be easily controlled by your smartphone via an app as well as wireless keyboard and mouse, which enables the user to undertake basic PC tasks. One of its strong points is its performance as a media streaming device, with high-resolution video and 7.1 channel audio streaming.

The operating system for the Acer Revo One RL85 is Windows 8.1. The top line model, which retails in Australia for $1099, comes with an Intel Core i5-5200U Dual-core 2.20 GHz processor. The hard drive capacity of this top model is a capacious 2TB, which can be extended via twin SATA ports and RAID technology. In terms of network communication capability, it has Gigabit Ethernet, Wireless LAN, and Bluetooth. It also has a total of four USB ports (two in, two out)  and HDMI.

Over at PC Advisor, the general consensus is that this is a device that promises a lot but does not always deliver:

The Acer Revo One is one of the most interesting PCs we’ve seen a while packing a lot of hardware into a tiny space. It’s so small you could use it anywhere in the house without a problem.

The reviewer at TechRadar is firstly impressed by the sleek design of the unit:

The photos don’t lie – this is a singularly handsome little device, an escapee from the ethereal science-fiction school of design.

The review goes on to laud the versatility of the unit even if it is not especially exceptional in one particular capacity:

It’s a smart, tiny device that fits well in every environment but is especially designed for home entertainment – gamers will surely go for something like the Alienware Alpha instead.

The Alphr review of the device also has high praise for the design, usability and flexibility of the device but, again, questions its suitability for higher-application uses such as video editing:

Performance is perfectly respectable, but you won’t be using this as a video-editing rig…

In all, we’d say the Revo One is a pretty good deal: it’s neat, well designed and reasonably priced, and the extensive storage and RAID options mean it can act not only as your main deskbound PC and media hub, but also as the main data repository for your home. If you’re in the market for a new machine, it’s well worth considering.

As something with more scope and grunt than a dedicated streaming device, the Revo One is definitely worth considering. It extends on the basic streaming capabilities of other media hub devices in a way that lends itself to becoming a very handy device for the lounge room or study. Though, if you already have a media streaming device like the Chromecast as well as a laptop, it might be hard to justify forking out the money for the Revo One.