Alan Finkel: Robots won’t replace us because we still need that human touch 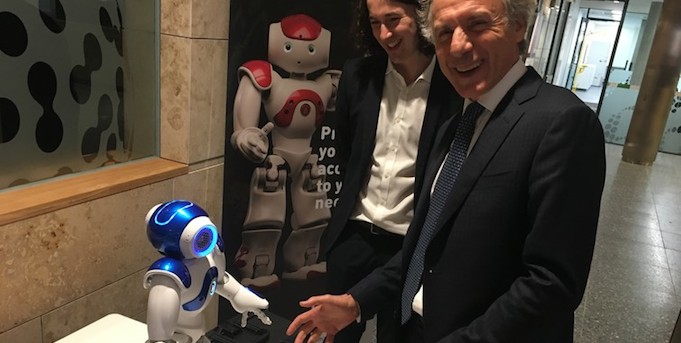 By Alan Finkel, Office of the Chief Scientist

By now, you’ve probably been warned that a robot is coming for your job. But rather than repeat the warning, I’ve decided to throw down a challenge: man against machine.

First, I’ll imagine the best possible robot version of an Australian Chief Scientist that technologists could build, based on the technologies available today or in the foreseeable future. Call it “ChiefBot”.

Then I’ll try to persuade you that humanity still has the competitive edge.

Let’s begin with the basic tasks our ChiefBot would be required to do.

First, deliver speeches. Easy. There are hundreds of free text-to-voice programs that wouldn’t cost the taxpayer a cent.

Second, write speeches. Again, easy. Google has an artificial intelligence (AI) system that writes poetry. A novel by a robot was shortlisted in a Japanese literary competition. Surely speeches can’t be so hard.

Third: scan the science landscape and identify trends. Watson, developed by IBM, can already do it. Watson is not just history’s most famous Jeopardy! champion: he’s had more careers than Barbie, from talent scouting for professional sport to scanning millions of pages of scientific reports to diagnose and treat disease.

Fourth, and finally: serve on boards and make complex decisions.

ChiefBot wouldn’t be the first robot to serve in that capacity. For example, an Australian company now sells AI software that can advise company boards on financial services. There’s a company in Hong Kong that has gone one step further and actually appointed an algorithm as a director.

So, there’s ChiefBot. I admit he’s pretty good. We have to assume that he will capture all the benefits of ever-advancing upgrades — unlike me.

But let’s not abandon our faith in humanity without looking again at the selection criteria for the job, and the capabilities on the human resume.

Start with the task we’re engaged in right now: communicating in fluent human.

We’re sharing abstract ideas through words that we choose with an understanding of their nuance and impact. We don’t just speak in human, we speak as humans.

That’s knowledge that ChiefBot will never have, and the essence of the Chief Scientist’s job. Chalk that up to Team Human.

That means that when I speak to an audience, I am giving them something exclusive: a chunk of my time. It’s a custom-made, one-off, 100% robot-free delivery, from today’s one-and-only Australian Chief Scientist.

True, I now come in digital versions, through Twitter and Facebook and other platforms, but the availability of those tools hasn’t stopped people from inviting me to speak in person. Digital Alan seems to increase the appetite for human Alan, just as Spotify can boost the demand for a musician’s live performances.

We see the same pattern repeated across the economy. Thanks to technology, many goods and services are cheaper, better and more accessible than ever before. We like our mass-produced bread, and our on-tap lectures and our automated FitBit advice.

Call it Finkel’s Law: where there’s a robot, we’ll see renewed appreciation for the humans in the robot-free zone. Team Human, two goals up.

Let me suggest a third advantage: you and I can be flexible and effective in human settings. In our world, AI are the interlopers. We are the incumbents. It’s the robots who have to make sense of us. And we make it extraordinarily hard.

Think, for example, of a real estate negotiation. We could rationalise it as an exchange of one economic asset for another. In reality, we know that our actions will be swayed by sentiment, insecurity and peer pressure.

In that swirl of reason and emotion, the art of the real estate agent is to anticipate, pivot and nudge.

The human real estate agent is the package deal. She can harness AI to sharpen her perceptions and overcome cognitive biases. Then she can hit the human buttons to flatter, deflect or persuade.

That human touch is hard to replicate, and even harder to reduce to a formula and scale. Team Human, three goals to nil.

Here’s a fourth argument for the win. We humans have learned the habit of civilisation. Let me illustrate this point by a story.

A few years ago, some researchers set out to investigate the way that people interact with robots. They sent out a small robot to patrol the local mall.

That robot had a terrible time — and the villains of the story were children. They kicked him, bullied him, smacked him in the head and called him a string of indelicate names.

The point is not that the children were violent. The point is that the adults were not. They restrained whatever primitive impulse they might have felt in childhood to smack something smaller and weaker in the head, because they had absorbed the habit of living together. We call it civilisation.

If we want artificial intelligence for the people, of the people and by the people, we’ll need every bit of that civilising instinct we’ve honed over thousands of years.

We’ll need humans to tame the machines to our human ends. I’d say that’s Team Human, in a walkover.

Together, these points suggest to me that humanity has a powerful competitive edge. We can coexist with our increasingly capable machines and we can make space for the full breadth of human talents to flourish.

But if we want that future — that human future — we have to want it, claim it and own it. Take it from a human Chief Scientist: we’re worth it.

This article is based on a speech Alan Finkel delivered to the Institute of Electrical and Electronics Engineers (IEEE) international conference in Sydney earlier this month.