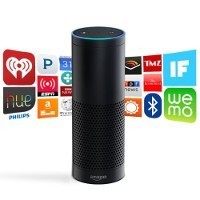 The Amazon Echo is an oddly chimeric device. It’s a cylindrical-shaped 360-degree speaker/listening post with voice control capability that allows you to control other internet-connected devices, such as Belkin WeMo switches and Philips Hue lights at this stage.

Amazon announced the pre-launch of the Echo late last year when it was released on an invite-only basis. This past week, it has been launched in the US market for the general public to purchase for $US179.99.

Its main feature is Alexa, the cloud-based voice service which does similar things to Apple’s Siri. The Echo has far-field voice recognition and seven-microphone beam-forming technology, so Alexa can hear you from across the room even while the Echo is blasting out your favourite hits.

The speaker itself has a 2.5 inch woofer and 2.0 inch tweeter.

It comes with a free companion app on Fire OS, Android, iOS, and desktop browsers, which enables you to easily manage your alarms, music and whatever else ends up getting connected.

In a way, the Echo faces a similar problem to other devices such as wearables and smartwatches: Why bother with this device when we already have a smartphone that can do most of this stuff already?

When the Echo had its pre-release last year, Heather Kelly at CNN thought it was a nifty idea to take a Siri-like intelligence and plonk it in a smart home device:

What if, instead of picking up a smartphone or touching a mouse, you could just say, “Remind me to buy shampoo,” “Play some bluegrass music,” or “How many moons does Saturn have?” in the middle of your living room?

While washing her hair and listening to Blue Moon of Kentucky, Kelly further enthused:

It takes the intelligence and voice-recognition of Siri and puts it someplace unexpected, inside a smart home device.

Mario Aguilar at Gizmodo also thought Alexa had a more “natural feel” than the “clumsiness” of poor old Siri or the blandly named Google Now:

Of course voice assistants aren’t an entirely new concept, but building the technology into a home appliance rather than into a smartphone makes a lot of sense and gives the technology a more conversational and natural feel.

It eliminates the clumsiness of assistants like Siri and Google Now that you have to be right on top of.

Writing for TechCrunch, Natasha Lomas homed in on what is probably one of the main reasons for Amazon to have manufactured this device, which is that it gives you one more way to buy something from Jeff Bezos’ e-commerce emporium.

Driving ecommerce on its website is clearly one sizable business driver for Amazon with Echo, along with — more generally — creating another incentive for consumers to play within (and pay for) its ecosystem of services.

In his review of the Echo for Fortune, David Pierce compares Alexa to an adorable infant; full of delight and potential but prone to tumbles and messy accidents:

Meet Alexa. She’s sitting over there, on the shelf next to my TV. She’s very young, just a couple months old. People who meet her obsess over her, cooing and asking her questions. She’s remarkably smart for such a young thing, but like every infant she perpetually toes the line between totally adorable and incredibly annoying. And at least once, she’s woken me up in the middle of the night.

Pierce also points out another teething issue for Alexa, which is that she lives inside the Echo and is reliant on Amazon’s nascent cloud service and software:

I’ve learned how to speak to Siri, how to bend Google Now’s robot to my will. But Amazon is building its own cloud service and software from scratch, competing with Google and Apple rather than borrowing from them. That’s hard, slow work, and right now it means Alexa is a unique breed of voice assistant: sometimes smarter, sometimes dumber, always more confusing.

While the reviews are generally positive, some even gushing, whether you fork out the money to buy the Echo and plug into Alexa’s growing world of interconnected devices will likely depend on how ensconced you already are in the Amazon ecosystem. The price is certainly not exorbitant, so it might not be too much of a gamble to pick up an Echo and see how it performs for you.