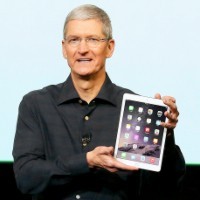 Apple may be looking at introducing a stylus alongside its rumoured iPad Pro tablet, with the tech giant set to take a cue from business-market tablets by Samsung, Lenovo and Microsoft.

Although not officially announced, there has long been speculation Apple is developing a 12.9-inch tablet under the working title “iPad Pro”, with a screen size significantly larger than either the 9.7-inch iPad Air or the 7.9-inch iPad mini 3.

The device is likely to compete against tablets aimed at the business market, including Microsoft’s Surface Pro 3, Lenovo’s ThinkPad 10, Samsung’s Galaxy Note 10 and Asus’ line of “Transformer” tablets.

Apple Insider reports Ming-Chi Kuo, an analyst from KGI Securities, has issued a note to investors saying Apple is likely to also release a stylus during the second quarter of this year, alongside the new tablet.

Kuo is a highly regarded analyst, known for having reliable supply chain sources and has previously predicted previous Apple innovations, such as the Apple Watch.