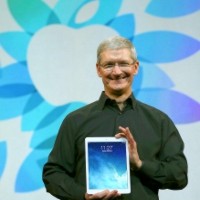 Apple has posted profits of $US8.5 billion ($A 9.679 billion) in the quarter to September 27, up from $US7.5 billion a year earlier, with total revenues up 12% to $US42.123 billion, despite China and iPad sales remaining sluggish for the company.

The Americas (including the US) continues to dominate the company’s revenues, up 17% $16.247 billion, with European revenues dwarfed by comparison, up 19% to $US9.535 billion, and Japan another strong market, up 5% to $US3.5 billion.

Since January, Apple’s iPhones have been available through China Mobile, the world’s largest mobile carrier with over 700 million subscribers in total. Despite this, Apple’s revenues from China grew just 1% year-on-year, from $US5.733 billion to $US5.778 billion, falling by 3% quarter-on-quarter.

There was also a 3% year-on-year fall from Asia Pacific revenue, excluding greater China and Japan but including Australia, which fell from $US1.98 billion to $US1.923 billion, alongside an 11% quarter-on-quarter decline.