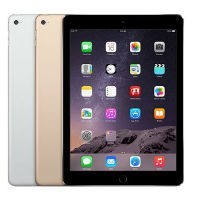 Apple has unveiled the iPad Air 2, the latest version of its popular tablet. It features a Touch ID fingerprint sensor and an even thinner body.

he tablet looks basically the same as its predecessors, but is now 6.1mm thin, and weighs less than a pound. It has an improved Retina display and better cameras. The Touch ID feature enables users to make purchase easily and securely within apps, and Apple Pay.

The iPad Air 2 is powered by a new Apple-designed A8X chip, which delivers a 40 percent improvement in CPU performance and 2.5 times the graphics performance of iPad Air, while delivering up to 10 hours of battery life.

The company also released the latest iPad Mini – the iPad Mini 3, which also features Touch ID, and an iPad Mini 2 with Retina display.

They’re all available in gold, silver and “space grey”. Australian customers can preorder the latest iPad’s online starting on Saturday, with a retail launch expected “later next week”. The iPad Air 2 16GB Wi-Fi model will be available for a suggested retail price of $619. The 128GB Wi-Fi + cellular version is priced at $1,019.

“The new iPad Air 2 is packed with amazing new innovations, weighs less than a pound, and at just 6.1mm is the thinnest tablet in the world,” he says.