Australia’s 12 most influential people in tech 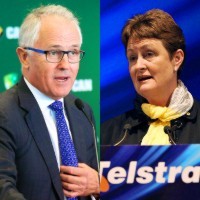 They are business owners, venture capitalists, and government ministers. They are serial entrepreneurs and they regularly grace the front pages of national newspapers. But most importantly, when they have something to say, Australia listens.

They are the 12 people who have wielded the biggest influence in the Australian tech sector in 2014, and they’re on SmartCompany’s most influential people in tech list.

Twelve months on from the election of the Abbott government, Communications Minister Malcolm Turnbull still finds himself on the list of powerbrokers, although his ranking has slipped a few places since last year. The National Broadband Network continues to play a dominant role in the future of the country’s technological infrastructure but those it presented the greatest threat to – namely Telstra – are re-inventing themselves and forging new paths. Telstra’s chair Catherine Livingstone and chief executive David Thodey both appear on this year’s list.

But that’s not to say the power of entrepreneurs and business owners is diminishing – if anything, it has grown over the past 12 months, as can be seen in the success of home-grown tech start-ups Freelancer and Atlassian.

So who are the most powerful tech players in Australia and where did they come from?

Matt Barrie helped reawaken the appetite of Australian retail investors for technology stocks with the float of his online outsourcing company Freelancer.com in November last year. The stock debuted at more than four times its listing price of 50 cents, and while it has come back somewhat from those dizzying heights, it is still trading at a 50% premium.

Barrie has since acquired several competitors, opened offices in four countries, and expanded into the payments industry, as part of his goal for Freelancer being to help a billion people get a (small) job. Barrie is highly active in the start-up community, mentoring young entrepreneurs and speaking at multiple forums.

He has been vocal in his support for bringing entrepreneurship and technology into the Australian school curriculum, and teaches an innovation class as an Adjunct Professor at the University of Sydney.

Paul Bassat has achieved incredible success since he, his brother Andrew and business partner Matt Rockman founded the online recruitment and education company SEEK in 1997. Now he is taking the business skills that helped grow SEEK into a $5.5 billion company and using them to help other would-be disruptors as co-founder of venture capital investor Square Peg Capital.

Bassat says he is looking for outstanding entrepreneurs solving big problems and helps them to take the next step, and to date Square Peg has placed money in local start-ups including Canva, goCatch, ROKT and Vend. Bassat is also hoping to bring some of his passion for technology and innovation into his broader responsibilities as a non-executive director at Wesfarmers and commissioner at the Australian Football League.

It can be a difficult task to span the worlds of government and commerce. Doron Ben-Meir brought commercial ability to his appointment as the inaugural director of the former government’s Commercialisation Australia industry assistance program in April 2010. There are many people in the technology sector who are hoping he can do so again in his new role as director of the federal government’s $484.2 million Entrepreneur’s Infrastructure Programme, where he is overseeing the development and rollout of the government’s largest program to assist technology innovators. Ben-Meir brings significant real-world experience to the role, having founded five companies and been an active venture capital investor through three different funds.