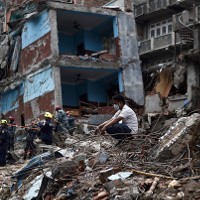 A Brisbane software development company and outdoor retailer Kathmandu are among a number of Australian businesses helping the relief effort in Nepal following the earthquake that has now killed more than 6000 people.

NetEngine is calling for volunteers to help in its campaign to map remote Nepalese communities displaced by the disaster.

Bruce Stronge, managing director of NetEngine, said in a statement it is important to give as much help as possible to aid workers on the ground.

“With aftershocks still rocking the region, it’s critical to get the maps up to date so the international aid organisations can get help to where it’s most needed,” Stronge said.

“Our team is leveraging mobile and web-based applications, participatory maps, aerial and satellite imagery, geospatial platforms and advanced visualisations to provide up to date mapping during this humanitarian crisis. We are calling on anyone who’d like to help to log on and start mapping.”

NetEngine’s efforts to help the Nepalese relief efforts is part of a mapping project through its Random Hacks of Kindness “movement”, which has mapped communities affecting other emergency situations, including the earthquake in Haiti in 2010, the typhoon in the Philippines last year and the outbreak of Ebola in West Africa, also last year.

Stronge told SmartCompany his motivation for starting the mapping project in 2010 – part of a broader trend of what he terms “digital humanitarianism” – was to “use technologies to bridge inequality”.

“NetEngine is in the right place to help out,” he says, adding the movement is run in partnership with MYOB, Melbourne computer consultancy DiUS and the REA Group.

“Crisis mapping is (one of the) richest sources of data” for people on the ground, according to Stronge.

The United Nations sends thank-you messages to organisations such as his for providing valuable data, Stronge says.

Another Australian business helping out with the fundraising efforts is outdoor retailer Kathmandu.

People at the company are giving equipment, clothing and financial assistance to the Australian and New Zealand arms of the Red Cross, a statement on its website said.

“We have a close affinity with the city that inspired our brand. The Kathmandu team and the thousands of our Summit Club members who have visited the city and trekked through the Himalayas feel the impact of this tragedy,” the statement said.

“Helping the Nepalese people recover and rebuild will require substantial international aid and we hope that facilitating donations at all our Point of Sale terminals will make it easier for people to make a contribution,” Todd said.