Meet Aggie, the world-first robot who’ll be taking tours at the Art Gallery of Western Australia 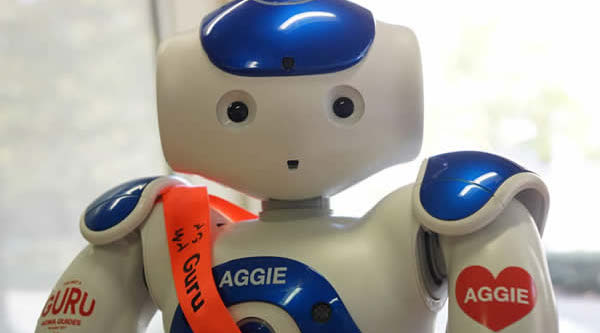 Robots can now add fine art commentating to their list of capabilities, with the Art Gallery of Western Australia introducing its first robot tour guide this month.

The 60-centimetre robot is called Aggie and will be taking tours around parts of the gallery every month from May 28 onwards.

Aggie is the world’s first robot art gallery guide, and despite her size, she is programmed to be enjoyed by adults and children alike.

Aggie is programmed with information about artists and artworks, along with soundscapes that attempt to engage viewers with the paintings. She can maintain eye contact, walk, sing, talk and even give high fives.

Aggie was designed by French company Aldebaran and runs on software developed by Belgium company QBMT.

However, Australian software company Smartbots programmed Aggie and her personality in Perth.

Anitra Robertson is the chief operating officer of Smartbots, which is an arm of aged care technology company Surgical Realities.

Robertson created Smartbots when she realised her company could also target non-health industries.

“We’ve also been using them to measure things like wellbeing, happiness, and cognitive decline in aged care.”

Programming Aggie took Robertson and her team about five months, during which time they overcame difficulties such as name pronunciation.

“Some of those European artists’ surnames can be challenging, but we’ve got pretty close,” Robertson says.

“She’s got some really detailed knowledge, and her tour is where she comes into her own.”

For certain paintings, Aggie will play sounds that match the environment of the painting, and even act as if she were in that environment.

For example, at a painting of a beach, the sound of seagulls and water plays, and Aggie lies down as if lazing in the sand.

After declaring, “I could stay there all night”, she gets up and the tour continues.

Along with taking monthly tours, Aggie will be holding art classes for children, where she’ll take kids through basic artistic principles.

Robertson says her team programmed Aggie’s personality so she could be appreciated by adults also.

“She is programmed to be cute, but also a bit cheesy,” Robertson says.

“When we displayed her adults loved her too, she’s so engaging they were equally as impressed as the kids.”

“It’s a robot in an art gallery, it’s unique, a bit of a twist on a traditional gallery.”

“She does draw a new demographic into the gallery which they’ve had trouble doing in recent times,” Robertson says.

“We wanted to shake it up, give it a new spice of life.”