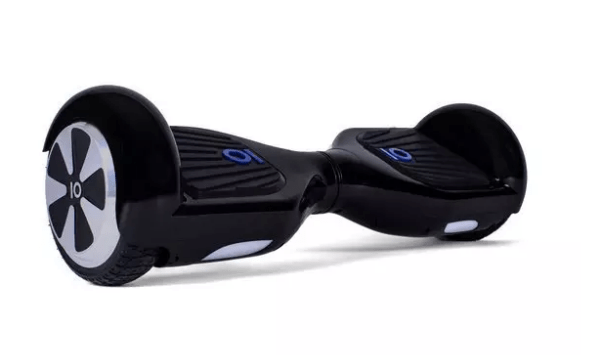 When you need to get from point A to point B you can do it the traditional way, walking, or you can take the this self-balancing electric sideways scooter. This gadget is being touted as the future of indoor transport. Whether that’s true or not, you’ll be a hit with the kids at home and anyone who comes into the office will think you and your business are light years ahead.

As far as a universal name goes for the gadget, there is yet to be a consensus. It’s description has varied from “two wheels self balancing, smart drifting scooter electronic mini unicycle intelligent vehicle monocycle” to “self-balancing skateboard” to “two-wheel auto balancing electric scooter”. No one knows what it’s called but once they see it in real life, or more accurately see first-time users struggling to stand up straight, they’ll know the gadget.

It’s been used by celebrities, on talk shows and frequently featured by youtubers, so if you haven’t seen it by now you really need to click any of the above links.

Between companies such as Scoot, IO Hawk and PhunkeeDuck, the price can range from $US459 to around $US1799. This price difference of over $US1000 has led many to question the difference in the quality of manufacturing, but almost all reviewers will tell you they’re made in the same factory.

The gadget has its origin in China, according to Wired, from a company called Chic Robotics, also known as Hangzhou Chic Technology Co Ltd. Their logo is a horizontal line above a circle, which conveniently looks a lot like the logo on all the IO Hawk products.

Chic Robotic’s first version of this gadget was called Smart S1 and debuted in August of 2014. Its newest model is what became all the rage on international levels and is called the Smart 2-Wheel Self Balancing Scooter.

Whether you use it to get around the workshop faster or to make your kids jealous – this gadget will have people talking for days.

A lot of companies are selling their own versions, each claiming to be different from the other.

The most this little gadget can handle is around 130kg and its top speed comfortably sits between 14km/h and 19km/h, which is pretty fast when you compare that to the average walking speed of around 6km/h.

The beauty of this gadget being so small is that it also doesn’t take much fuel to run. It actually takes none at all. It runs on electricity that takes two hours to charge to get just less than 20km out of it.

The devices are water and dust proof; however, manufacturers recommend only using the board indoors.

Electronic transportation devices have been around for a few years with a self-balancing electric unicycle entering the market late last year along with electronic skateboards and bikes already available.

Everyone loves them. It makes you feel straight out of Back to the Future and turns everyone around you into a child again as they try it with weak legs before quickly getting off to avoid making a fool of themselves.

Gizmodo’sLuke Hopewell liked it so much he’s said “it’s the best fun you’ll ever have standing up”.

“If you work in a large office and need to get from point A to point B in a futuristic hurry, this is amazing for you,” says Hopewell.

Digital Trend’s Brandon Widder has said that “moving is remarkably easy, with most spectators … taking to the device with the ease of riding a bike after wobbling for a second or two.”

Buyers on Amazon have said described it as “intuitive” and “smooth”, with one buyer saying “So much fun! Yes, it takes some practice but so does riding a bike. Love it and would buy it again”

With a battery that will probably last longer than your iPhone and a speed higher than you could sprint, this ‘2-wheel self-balancing scooter’ is worth it. You’ll be able to impress clients as they come in and maybe even get a second one for visitors to your workplace – what a fantastic way to roll out the red carpet for them!

For around $600 you could have one delivered to your doorstep next week from China and at that price, especially if you commute from train stations to work in the city or around warehouses and factories all day.