How Amazon and Google are killing Box, Dropbox and Hightail: Best of the Web 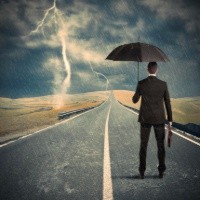 Back in April, I observed how competition was intensifying in the cloud storage market, but this was likely to lead to a shakeout.

Simply put, as the likes of Google, Amazon and Microsoft cut their prices, I found it difficult to see how smaller storage providers such as Box, Dropbox and Hightail could avoid getting crushed.

Sure enough, a few months on, Quentin Hardy of the New York Times reports the smaller cloud storage providers are desperately looking for new niches in an increasingly urgent battle to survive:

Nothing concentrates minds at a tech start-up like living in the middle of a price war between Amazon and Google.

Just ask executives at companies like Box, Dropbox and Hightail. They pioneered a new kind of Internet service that allows people and companies to store all kinds of electronic files in an easy-to-use online locker. But as often happens, the much bigger companies liked the idea so much they decided to do the same thing — at a much lower price.

The rise, fall and return of virtual reality

Imagine 10 years ago trying to envision the way we use cellphones today. It’s impossible. That’s the promise VR has today. VR at its best shouldn’t replace real life, just modify it, giving us access to so much just out of reach physically, economically. If you can dream it, VR can make it. It’s a medium for progress, not the progress itself. In celebration of the rise of VR still to come, The Verge investigated its past, present, and future to offer a glimpse of what we feel is enormous possibility.

Speaking of the Mark Zuckerberg-founded social media giant, it has recently been caught in a series of lawsuits over its origins. Over at Ars Technica, David Kravets looks at the strange saga that is the disputed origins of Facebook:

The criminal proceedings surrounding the ownership of Facebook, at its core, rely on a two-page document—a contract that is either forged or worth billions of dollars. Either Facebook Chief Mark Zuckerberg, as an 18-year-old Harvard University student, promised half of his company to a rural New York man named Paul Ceglia, or he didn’t.

Round One of this high-stakes battle went to Zuckerberg, who sits in the corner office of the Menlo Park, California-based social networking site. Ceglia, on the other side of the country, is currently free on $250,000 bond and must wear an electronic-monitoring ankle bracelet. He’s in legal hot water, facing criminal fraud charges following accusations he forged a contract to hijack half of Facebook. The wood-pellet salesman is staring down a maximum 40-year prison term if convicted—yet maintains that he’s the true victim.

How Aol dealt with trolls

For a brief moment in the ‘90s, long before the term “social media” had been coined, the chat rooms and instant messaging program run by Aol dominated how people chatted to their friends and colleagues online.

With trolling now a growing issue on social media, it is interesting to observe how Aol dealt with the issue. The problem was its tactics, though often successful, eventually led to lawsuits. Alex Mayyasi from Priceonomics explains how:

Aol’s chat rooms were new, intriguing, and a draw. But people had not yet accepted that the Internet was a Wild West, always a bit out of control, so Aol worried about how to keep chat rooms safe. How could the company keep parents from barring their children from chat rooms like the sketchy park down the street?

The company did so by following the model high schools use to police prom: employees recruited large numbers of volunteer monitors to supervise its chat rooms and act as “community leaders.” The only problem was that unlike a high school, Aol was a massive Internet company. And for-profit companies don’t have volunteers; they have lawsuits waiting to happen.