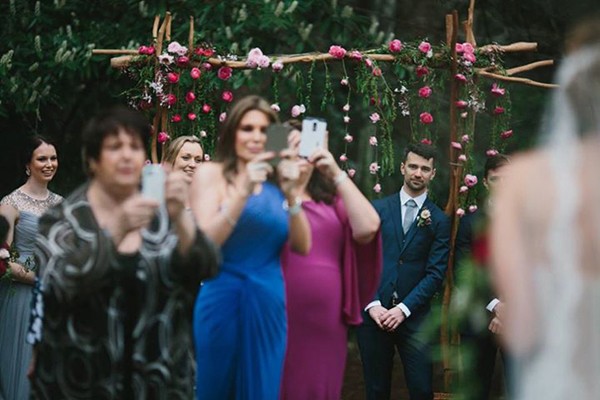 A wedding photographer in New South Wales says he has been overwhelmed with a “massive influx” of enquiries from potential customers since his social media post about the ubiquitousness of mobile devices at wedding ceremonies went viral.

Thomas Stewart’s post went viral over the weekend and, at the time of publication, has been liked by more than 92,000 people, viewed 13.5 million times, shared 62,000 times and attracted some 19,000 comments.

Stewart, who runs his small business Thomas Stewart Photography in Bowral with his wife, posted on his business’ Facebook page on Friday afternoon about how difficult it is to do his job while wedding guests are taking photos on their phones and devices.

In the post, Stewart outlined the importance of wedding ceremonies being technology free and “unplugged”.

He included a photo of a groom who is obstructed from a view of his bride walking down the aisle because of a handful of guests taking pictures on their phones and standing in front of the wedding party.

In the post Stewart does not blame guests but he said as a photographer, he laments not being more forthright in instructing clients to have a no-device policy at their weddings and calls on others to be mindful about the impact technology can have on the couple at the centre of the day as well.

He finished the post with a plea to guests: “So guests please, for my sake, and for sake of the two people getting married, leave your cameras at home and put your phones / iPads away.”

Right, I’ve had enough. I want to talk to you all about guests using mobile phones / cameras at weddings. I want to…

Stewart told SmartCompany this morning he has been shooting weddings full-time for about six years but about three years ago when he started noticing a lot of people at wedding ceremonies pulling out their iPads, iPhones, and cameras.

“IPads are especially a killer, because they’re so huge,” he says.

The presence of guests’ cameras and phones started to affect his work, with Stewart citing a recent bad run of “pretty crippling” scenarios for him as a photographer, including the wedding in the photo he highlighted in the post.

That incident made Stewart realise he had a responsibility to inform others of the issue and that’s “why I decided to have that rant”, he says.

Stewart says the reaction to his post has been “pretty overwhelming” but he was grateful for the exposure and that the issue has received so much interest.

“I’m a bit freaked out by it. I just love shooting weddings, my wife and I have a partnership and we’re a small business,” he says.

“I’ve seen massive influx in enquiries to the business. I’m very glad I wrote the post.”

Asked what he put the popularity of the post down to, Stewart thinks it is two-fold.

“The wedding industry is huge right now and many people are spending good money on photographers,” he says.

“Then there’s technology in general – lots of people are getting frustrated with the crazy, strong and important role people place on their phones and cameras.

People feel that sentiment – why can’t people just be in the moment?”

But he says it’s not about holding guests accountable and he encouraged other small businesses in the wedding photography business to talk with their own clients to educate them about the issue.

“I would definitely encourage any small business and photographer to have a discussion with their clients; they will be very appreciative of getting the heads up.”