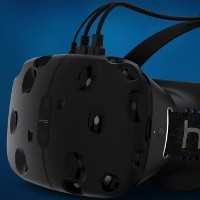 Virtual reality is very much back on the agenda. With 3D printing on the rise, makers of virtual reality headsets have sprung into gear as well.

To that end, HTC has developed a virtual reality headset called Vive.

HTC is releasing its developer version of Vive in the northern spring—producing a snazzy website for the Vive to boot—and expects to release a consumer version by the end of the year.

HTC has not given details yet, but the expectation is the cost could amount to four digits for initial units.

In order to bring about virtual reality, the Vive has a 1200×1080 pixel screen and a refresh rate of 90 frames per second. It also has a jack for headphones along with gyrosensor, accelerometer, laser position sensor, an HDMI port and two USB ports.

Also included are two game controllers, one for each hand.

In order to produce content, HTC has gone into partnership with Valve Corporation, best known for games such as Portal and Half Life 2.

Writing for Engadget, Nicole Lee says despite some challenges she walked away from her Vive demonstration “a believer” in HTC’s ability to bring about virtual reality:

All those cords make it really difficult to walk around the room without the fear of tripping and falling over. Even if the controllers will be cordless eventually, HTC says the headset itself would still probably be tethered to a PC due to latency issues with wireless connectivity. Plus, not everyone will have the room or space to hook up two laser base stations so that the Vive will work. We also have yet to know what the minimum PC requirements are for the Vive to work as smoothly as it did.

My movements were a little hampered by the amount of cords that I had to walk over, but I otherwise had no problem with balance or spatial awareness. I didn’t get any kind of motion sickness at all.

Jeffrey Van Camp from Digital Trends says the Vive reminds him of the aspirations people had in the early 1990s about what a virtual reality device would look like.

The HTC Vive is no(t) a holodeck nor some gizmo from the Matrix, but it is the first device I’ve ever used that delivered on the lofty promises that virtual reality enthusiasts made in the early 1990s. I can’t wait to Vive again.

The Vive didn’t make me a better artist, but it was the first software since I used Paint in the early 1990s that got me excited about creating art. I can imagine engineers and artists of the future using systems like this to design the masterpieces we all take for granted.

With the Vive, HTC and Valve Software took me to other worlds for the first time in my waking life. It was frightening, astounding, surreal, and I desperately hope to return.

Scott Stein was effusive in his praise of Vive writing for CNET:

I’ll tell you. It’s an amazing experience, a jaw-dropping demo, a journey that even trumped my recent demo with Oculus Rift Crescent Bay just two months ago. It’s a proof of concept, too: I was able to wander the whole room, just as advertised. And the Vive’s VR controllers are the best I’ve ever seen.

That the demo looked this good, and performed this well, amazed me. It’s transformative stuff. I was in that space, doing things, more immersed than I’ve ever seen before. Is it practical? Will it work in all rooms? Will the tether work at home? Will the games be great? I have no idea. But this is a great step forward, and Valve and HTC have more than proven they will be major contenders.

And Trusted Reviews says the Vive is a different kettle of fish:

HTC and Valve with its SteamVR system have done something different entirely. They’ve given us confidence that virtual reality is not only viable, but it’s totally within our reach. And it’s coming out at the end of this year. For consumers.

Valve’s SteamVR system and the HTC Vive are the future of VR. I have no doubt about it. Using lasers rather than cameras opens up the virtual reality space for true exploration and therefore true immersion. This is the first time I’ve been really excited by the potential of having VR in my home and I came away from the demo positively giddy.

Should you get one?

With the potential to experience virtual reality, the answer must be yes.

The real question is: how does Vive compare to similar devices on the market?

The biggest competition will come from Sony’s Project Morpheus, which will be able to work with the PlayStation 4 and related accessories.

Samsung has a virtual reality headset, the Gear VR, in the marketplace, which can be used with a Galaxy Note 4 smartphone. The Gear VR is wireless, one point of difference with the Vive.

Avegant’s Glyph device incorporates headphones into the design, and a beta version will be available to buy in the northern autumn.

Far from being virtual insanity, the HTC Vive promises to reshape the gaming experience when it comes out at the end of the year.