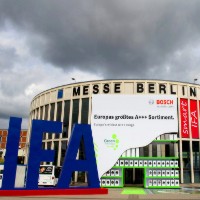 Executives from Philips, Panasonic, Samsung and Sennheiser are set to participate in panel discussions and keynote speeches at the 2014 IFA in Berlin, Europe’s most important annual consumer electronics trade show.

This will be followed on the Saturday by keynote speeches by the chief executive of Google’s Nest division, Tony Fadell and Sennheiser Electronic’s joint chief executives Daniel and Andreas Sennheiser.

The event will feature a panel discussion on the future of 4K television featuring representatives of Philips, the European Broadcasting Union, Joe Kane Productions, Panasonic Marketing Europe GmbH and Dolby.

There will also be a wearable technology discussion panel featuring speakers from Imagination Technologies, Fitbug and Medisana Space Technologies.

Alongside the show, which runs from September 5 to 10, both Samsung and LG are set to make a series of major product announcements.