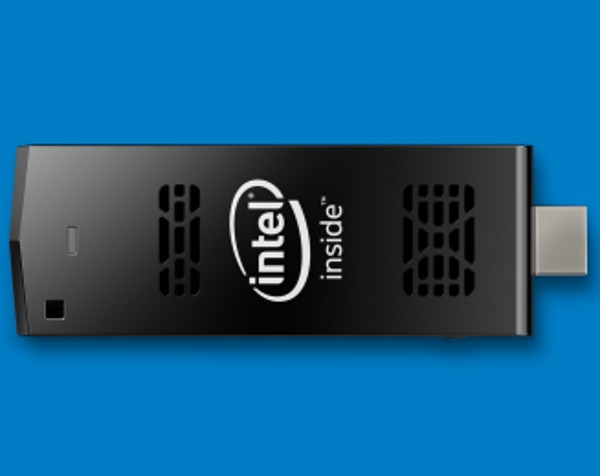 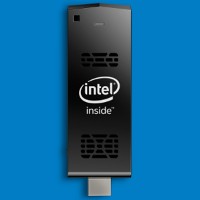 Computers just keep getting smaller. The latest device from chipmaker Intel is a full desktop PC that’s roughly the same size as a USB stick or a Google ChromeCast.

The idea behind the Intel Compute Stick is that you plug it in to the HDMI video port of any TV or computer screen, and turn it into a full desktop PC running Windows 8.1, without having a full computer or tower cluttering up your desk. Using a wireless keyboard and mouse means you also avoid most of the clutter that comes with a PC.

Especially for people who travel a lot for business, the idea of a full computer the size of a USB stick is certainly an appealing one. It’s not difficult to imagine a busy small business owner on a business trip plugging one into the back of a TV in a hotel room to quickly check her emails, and later plugging it into the back of a computer screen at an overseas office to access all her files without the hassle of needing to install everything.

But how well does it perform in practice?

It runs Windows 8.1 and is powered by a quad-core 1.33GHz Intel Atom processor with integrated Intel HD graphics.

The Compute Stick also includes a USB 2.0 port and a microUSB slot for power.

The verdict from Gizmodo’s Sean Buckley is simple: Don’t buy it:

Who wants a cheap HDMI stick that can turn any TV into a full Windows computer? Everybody, right? That’s what we thought. Oh god were we wrong. When Intel announced the $150 Compute Stick at CES, we figured it could become the ultimate miniature PC for all kinds of people. Too bad it’s terrible.

Theoretically, there are loads of things you could do with a computer this tiny. You could work from it, of course, or browse the web from your couch. Watch Hulu without a subscription. Stream games from another computer. My editor Sean Hollister was excited to load Steam on it, plug in an Xbox 360 wireless adapter, and play lightweight games like Nidhogg with buddies on a big screen without lugging a console around. I was dubiously optimistic I could turn the Stick into a Kodi media streamer, accessing videos from my desktop PC over my home network.

Do some of these things work? Sure. But using this under-equipped PC is a giant pain in the ass—to the point that it’s probably not worth it.

Andrew Cunningham from Ars Technica is slightly more complimentary – but not much:

The biggest functional problem we ran into was with the Bluetooth adapter. When the system was busy—lots of storage or CPU activity—mouse and keyboard input would become extremely laggy. Intel tells us that new drivers are coming that should help fix this issue, but the Stick only has one USB port. Bluetooth connectivity is especially important for keyboards and mice and other peripherals. It’s important that it works well, and as of this writing it doesn’t.

If you intend to use it as a streaming stick that happens to run other Windows applications, it’s more appealing: the hardware supports H.264, VC1, MPEG2, MVC, VP8, H.263, MJPEG hardware decode acceleration, and H.264 hardware encode acceleration. H.265 is missing, but the list of things Bay Trail can play without overtaxing the CPU and GPU encompasses most of the codecs used by major streaming services today. Hook it up to a 1080p TV (the maximum resolution the Compute Stick appears to support) and you’re good to go.

CNet’s Nate Ralph was slightly kinder to the device, albeit with low expectations:

But I went into this with managed expectations: you can generally rule out gaming or complex tasks like image editing on this Atom processor. For our performance tests, we pitted the Compute Stick against the $200 Intel Celeron-powered HP Stream 11 and the $500 Microsoft Surface 3, which is running on an Intel Atom processor. The Compute Stick was outclassed, though the margin was a bit closer than I expected in some cases.

The Compute Stick’s Bluetooth connectivity is spotty at best, and serves up a jittery experience whenever the Stick’s Wi-Fi is active. If you were hoping to pair your Bluetooth devices with the Stick, you’re going to be disappointed. This flaw, while fatal, wasn’t an issue for me, as I generally prefer wireless USB devices anyway. I turned to my old Lenovo N5902, but Logitech’s K400 offers a much roomier keyboard and will set you back about $25. This takes up the only USB port, but I struggled to find another use for it anyway — a combination of the microSD card slot and cloud services like OneDrive and Dropbox handle all of my file storage needs.

Finally, Desire Athow at TechRadarraised a number of other concerns with this device:

The dongle form factor was always going to be a compromise. The HDMI port is a fragile one and to get anything to dangle from it is asking for trouble. This is especially true if the HDMI ports on the client display do not face the floor.

There’s also the issue of powering the device – current HDMI technology cannot power devices yet which means that you need to secure an additional power socket to provide juice to the Compute Stick.

That brings in a fair amount of issues especially when used in a commercial environment as suggested by Intel. I don’t understand why Intel went for an active cooling system when almost all solutions based on the Z3735F on the market run passively. Adding a fan increases noise, uses power and adds another point of failure (they gather dust).

I have no doubt that the day will soon come when most computers are no larger than a matchbox. But that day isn’t today.

Certainly, the concept of a cheap computer the size of a USB stick that works by simply being plugged into the back of a TV or monitor is no doubt an appealing one for busy business executives who move about a lot.

But, as with many things in business and life, poor execution can bring down an otherwise solid idea.

Unfortunately at this stage, the compromises that come from having such a small form factor outweigh the benefits. As for being used as a streaming media device, devices such as Google’s ChromeCast fill that niche at a far lower price point.