Is Google’s Nexus Player the best Netflix device on the market? Gadget Watch 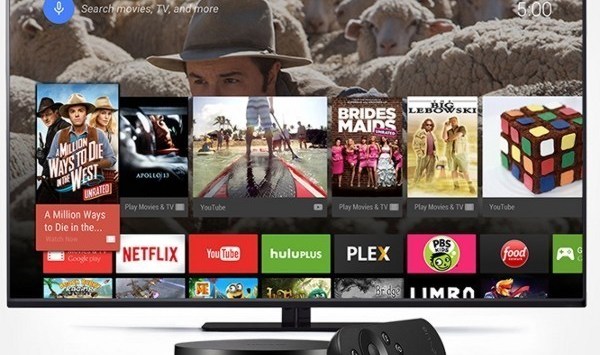 In recent months, anticipation has been building over the upcoming launch of Netflix in Australia. Already, as of Australia Day, Nine and Fairfax launched their own streaming video service, known as Stan. When you add in existing streaming video services, such as Fetch TV and Quickflix, along with pay-TV services such as Foxtel, and there has never been more competition for the subscription television dollar.

The growing competition has led to a proliferation of new internet-connected devices that connect to (or replace) our TVs.

Right now, there are three main options. The first is to get an internet-enabled set-top box or video game system that can run video apps.

The second is to get a HDMI stick, such as Google’s ChromeCast or Mozilla’s Matchstick. These look like a USB stick, plugs into the HDMI port of your TV, and allows you to send video clips or songs from your smartphone or tablet to your TV. Many cost less than $50.

The third option – on display at the CES – is a smart TV, which integrates the app capabilities directly into your TV, meaning you don’t need to hook anything else up to your TV.

When it comes to set top boxes, the Google option – unveiled in October of last year – is called the Nexus Player. Basically, it adds the full functionality of Android TV to any regular TV.

As with ChromeCast, you can stream content to your TV from a smartphone, tablet or PC. But, in addition, you can also run apps or games directly on your TV with a remote control.

On the other hand, it’s also a follow-up to Google’s ill-fated Nexus Q, which sunk without a trace in the market.

So is this the device you want to get ahead of Netflix’s launch? It’s time to take a closer look.

Google advises that the Nexus Player requires a TV with HDMI input, a HDMI cable and Wi-Fi internet in order to work.

It comes with 1 gigabyte of RAM and 8 gigabytes of storage – less than many entry-level smartphones.

There is an optional game controller, sold separately.

Despite running a range of apps, Gizmag’s Brian Burgess says the Nexus Player pushes you to download your movies and shows, just like Amazon’s Fire TV set top box.

The first time you connect the Nexus Player you’ll need to go through a set up process that includes signing in with your Google account. This is the first consumer device to run the Android TV interface that sits on top of Android 5.0. It is intuitive, fast and responsive, and it displays a nice 1080p picture.

Off the bat, you’ll notice the device pushing you to get your media content from the Play store, which isn’t surprising considering Apple TV and the Fire TV both push their company’s respective video stores too. But when you do a voice or text search, the Nexus Player only displays results from Google services and YouTube, and not from others like Netflix or Hulu Plus. In comparison, the Roku will let you know which streaming service has the content you’re looking for – although it doesn’t have voice search capability.

Amazon’s box has similar specs, aside from double the RAM (2GB), while the Roku and Apple TV are much less powerful on paper. Roku offers a handful of “casual games” but nothing that’s console-worthy. For all other functions, meanwhile, both Apple and Roku deliver fast response times (in particular, the Roku 3) with old hardware. The Nexus player also has slightly newer Bluetooth (4.1) and 802.11 Wi-Fi (ac) than the Fire TV.

Here’s where the Nexus Player and Android TV get slapped out of the rink. The number of “native” apps on the Nexus player — ones you can access via the main menu and are cleared to download from the Play store (and actually launch) — currently lags far, far behind the Roku, Apple TV and Amazon Fire TV.

You can get access to many more apps using Google’s Cast technology, the AirPlay-like system that debuted on Chromecast and is now compatible with numerous other devices, including Roku, WDTV and plenty of smart TVs.

Concerns about the small number of apps made for TVs and devices such as the Nexus Player are echoed by David Pierce at The Verge:

That, actually, is the story of the Nexus Player. It’s a glimpse at a different, more palatable future than Google TV ever offered. It may maybe even the actual future — Sony and Sharp are already signed on to make Android TV their smart TV platform — but it’s not a terribly compelling purchase right now. Google’s plan is to marry the power and flexibility of Chromecast with the communal, lean-back experience of flipping through Netflix genres on your TV. The bones of that are here. Now Google needs more: more content, more games, more apps, more everything. The Roku 3’s content selection simply embarrasses the Nexus Player (it even has Google Play now), Amazon’s voice search is superior and its interface is much faster, and the Chromecast offers virtually all of this functionality for a third of the price.

I have no trouble imagining the day, a few years from now, where I turn on my TV and am greeted by this colorfully tiled interface. It’s certainly an improvement on the heinous, ad-riddled messes we allow on input one today. But the TV is a difficult code to crack: we do a million different things when we’re in front of the TV, and we do it a million different ways. Google needs to build software that is at once powerful and simple, customizable and intuitive, that can work for anyone in any situation on any device and any screen size.

The concerns about apps are also echoed by Gizmodo’s Sean Hollister:

Android TV looks brilliant. The layout is about as intuitive and powerful as could be. You start on a home row of videos that Google recommends for you, ostensibly using fancy algorithms. Scroll to any one of them, and beautiful cover art fills the background of your screen. Click on any one of them, and they will instantly start playing, with surprisingly little buffering.

Ready for some bad news? Android TV has a cut-rate, tightly curated version of the Google Play app store instead of the real McCoy. Right now there are just 74 apps and games, combined, and you can’t even play 35 of those games without an optional Bluetooth gamepad at your side.

The problem with being an early adopter with technology is that it takes a while for new platforms to get bedded down, and Google’s Android TV is no exception.

Certainly, if you’re happy with Google Play’s selection of TV shows and movies, the Nexus Player is a good option, but at this stage don’t expect a lot more.